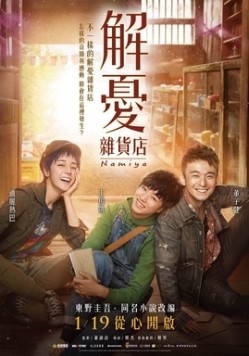 Keigo Higashino has carved a considerable reputation as one of Japan’s premier authors of crime novels and thrillers, via popular books like The Devotion of Suspect X and The Salvation of a Saint. His 2012 novel Miracles of the Namiya General Store is markedly different, telling a heart-warming story about an old man and a group of wayward orphans communicating via some magical effect across time. It was adapted by director Ryuichi Hiroki as a Japanese language feature film, but as is often the way with Asian cinema these days it has also been adapted into Chinese by director Jie Han. There is a larger Australian market for Chinese cinema than Japanese, and so the Chinese edition appears to be the version we got.

Three teenage orphans break into a rich woman’s mansion to vandalise it. Escaping in her car, they hide out from the authorities in an abandoned corner shop. When they explore the shop, they discover that 25 years earlier an old man (Jackie Chan) would give advice to the town’s residents: they would post a letter through a mailbox in the front and he would leave them replies out the back. When letters start magically appearing in the mailbox from 1993, they find themselves responding to the residents of decades past in the old man’s stead.

Namiya is a relatively heart-warming sort of comfort fantasy. It uses a portmanteau structure to tell the story of several people, each of whom seeks the advice of the corner shop and each of whom appears to have a connection to a nearby orphanage. It is a fairly messy viewing experience at first, but to its credit it does weave together the disparate story threads together in its final act and concludes as a much neater, more coherent film. It is not going to stun or shock anybody, but it is a relatively pleasant and inoffensive way to spend two hours in a cinema.

One small surprise is Jackie Chan, who does not even feature in the film’s poster despite playing what is arguably its central character. It’s a different kind of a role for him: old, slow-moving, thoughtful and kindly. Chan should transition out of action – a genre he really is becoming too old for – into less physical roles. This is a welcome step in that direction, and despite wearing a slightly unconvincing white wig he acquits himself comfortably. The other performances side a little too much towards the overly earnest, but then to a large degree they match the unironic sentimentality of the film as a whole.

This is an odd little movie. It feels charming but non-essential. For those still relaxing on summer holidays, it is a pleasant diversion out of the sun in the company of some nice characters inside a non-challenging story. There is always a place for this kind of a film: enjoyable but forgettable.