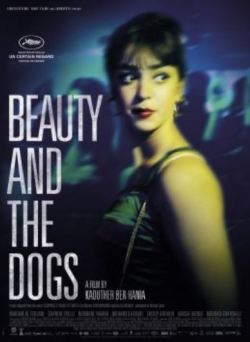 Mariam (Mariam Al Farjani) is a 21 year-old university student living in Tunis. When we first see her, she is camped out in the bathroom of a nightclub. She has torn her dress, and waits for a friend to bring her a replacement. Once that crisis is averted, she joins a student party. She chats to friends. She dances a little. She meets an attractive young man, and they decide to leave the club for an evening walk. The second time we see Mariam she is running full pelt down a road. Her make-up is streaked. Her hair is in disarray. She has been sexually assaulted.

Beauty and the Dogs is not a film you are likely to want to see, but at the same time it is a movie that you absolutely should track down and watch. It is a beautifully crafted film drama with a stylish affectation. Its performances are excellent. Its screenplay is very well put together. It is also a film about a woman who has been raped, and about the immediate aftermath of her assault.

It is a tough subject for any feature film to focus upon, and scene by scene it presents a harrowing experience. It is important for filmmakers to present stories like Mariam’s. It is important for us to watch them. Sexual assault is real and highly prevalent. Beauty and the Dogs loosely adapts a real-life assault that took place in Tunisia. While some of us may watch the film and partly dismiss Mariam’s experience as one of another culture and country, the truth is that a lot of the overwhelming challenges she faces – the disgrace, the scepticism, the slut-shaming – applies just as effectively to the USA, or the United Kingdom, or Australia.

Beauty and the Dogs never shows us Mariam’s assault. The film is boldly structured into nine lengthy scenes, each numbered on-screen and each presented in a single uninterrupted take. By the second scene she has already been raped by two police officers, and the remaining seven scenes take us through her seemingly Sisyphean effort to have the two officers charged and arrested. The fact is the audience does not need to see Mariam be assaulted, and by excising such a scene director Kaouther Ben Hania relies upon Mariam Al Farjani’s exceptionally powerful performance to sell the trauma. She does so with tremendous sensitivity and passion; it is one of the finest screen performances of the year thus far. Ghanem Zrelli is also very effective as Youssef, the attractive man who took a walk with her in the first place and now admirably goes to extreme lengths to help and support her.

Mariam’s journey is practically Kafka-esque. She lost her purse and ID card during the assault, so a local clinic refuses to examine her without identification. She tries at a public hospital, but they cannot proceed without the proper paperwork from the local police station – the same station whose officers just assaulted her. On it goes, bringing in not only a nightmarish bureaucracy that treats victims as if they are the guilty party but also a particularly fragile society still reeling from a nation-wide popular revolution. While the parallels are drawn between the assault of a woman by the police and the assault on an entire nation by its government, Ben Hania is wise to keep the focus permanently and sympathetically on Miriam.

This is a hard, dark journey, but it is also a very important film. It tells a story that needs to be told. It opens wounds so that we can interrogate them and acknowledge their existence. Technically and artistically it is tremendous. Its central performance is superb. Sometimes it is important to watch difficult films. Beauty and the Dogs makes that task an awful lot easier on the viewer, by virtue of being hands down one of the finest film dramas of its year.

This review was originally published on FilmInk.