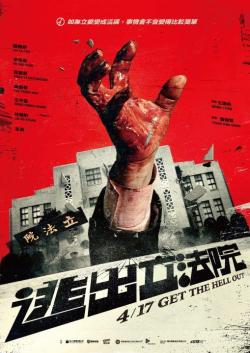 Zombie movies have always been an excellent outlet for social comment. George A. Romero’s Dawn of the Dead (1978) famously used the shambling masses to interrogate consumerism. Danny Boyle’s 28 Days Later (2002) traded on public fears over a viral outbreak – a fear echoed in Paul W.S. Anderson’s Resident Evil (also 2002). Filmmaker Wang I-Fan has found a social target of his own inside his 2020 zombie comedy Get the Hell Out, transforming the famously chaotic Taiwanese Parliament into an actual bloodbath of violent gore-soaked cannibals.

Hsiung (Megan Lai) has become a politician to prevent a toxic chemical factory from being built over her beachside childhood home. When a violent altercation sees her forced to resign in shame from Parliament, she ropes in the naive security guard Wang (Bruce Hung) to stand for public office in her stead. Just when she is ready to manipulate Wang into achieving her goal, a zombie outbreak stemming from the factory overruns the building and turns a fight for justice into a fight for survival.

Taiwan, an island democracy whose sovereignty has been consistently disputed by the People’s Republic of China, has a famously raucous Parliament. Some nations – Italy comes to mind – have well-earned reputations for rowdiness in political debate, including physical violence. Taiwan really has taken in a step further into robust theatricality. Debate has included representatives punching one another in the face, kicking, hair-pulling, throwing plastic bottles, water balloons, furniture, and even animal offal, sounding off air horns to silence opposition, and even literally eating legislative papers to prevent them from being voted upon. It is sometimes seen as a method for politicians to physically demonstrate their dedication to advancing the will of their constituents. Many more find it embarrassing and undignified.

Wang I-Fan’s satirical approach in Get the Hell Out is blunt and obvious, but also very effective: when a zombie virus breaks out on the Parliament floor, the political debate immediately collapses into wild mayhem and uncontrollable violence – asides from all of the eating of human flesh, it pretty much resembles an average day at the office. The Parliament dooms itself by pushing forward with an unwanted, toxic factory against the will of the public, and suffer mass carnage as a result. This seems a reasonable comment on the real-life Taiwanese government, which has been causing public discontent in recent years over whether or not to proceed with nuclear power.

The ensuing struggle for survivors to avoid being bitten and escape the building is a wildly chaotic jumble of violence, liberal spurts of blood, and deliberately absurd comedy. The cast uniformly give their all – particular highlights are Megan Lai as the ultra-aggressive and volatile failed member Hsuing, and Francesca Kao as a non-nonsense, seen-it-all, terminally ill receptionist. The jokes come at a frantic pace. Some hit, some miss, and yet more will succeed or fail based on the viewer’s understanding of the Taiwanese context. Certainly it is never boring, and Wang I-Fan’s enthusiasm – this is his debut feature as director – is as infectious as the zombie plague.

Get the Hell Out is loud, rambunctious, and extraordinarily messy – in the end it will be down to the individual as to whether that means disaster or delight. Personally, I enjoyed the hell out of it.

Get the Hell Out has been playing in Sydney and Melbourne at the Fantastic Film Festival.