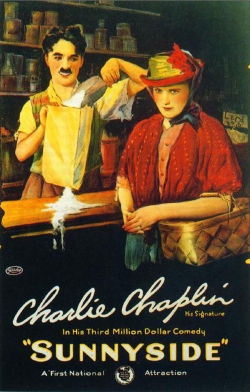 Like most, I can do the arithmetic and see that Charlie Chaplin’s extended short Sunnyside is 102 years old. Despite this it just feels wrong. I grew up in the last quarter of the 20th century, and cinema was still heralded at that century’s artistic achievement. Now it is last century’s achievement, and that simply does not sit comfortably with me. Despite its age there is an energy and an immediacy to Chaplin’s comedy. It does not seem out of date. It still works. The idea that someone cracked a joke less than a year after the First World War that is still inspiring smiles or laughter in 2021 seems perverse, but here we are.

Chaplin plays a downtrodden worker for a rural hotel and farmhouse. Constantly bullied by his overbearing manager (Tom Wilson), he pines for the “village belle” (Edna Purviance), despite the disapproval of her father (Henry Bergman).

Sunnyside was Chaplin’s third film for First National Pictures, and continued the increased sophistication and complexity in his work: the French director Louis Delluc described his first film with National (A Dog’s Life) to be ‘cinema’s first total work of art’. Certainly there is a growing sophistiction in Chaplin’s narratives at this stage of his career; growth that would culminate two years later in The Kid.

The early scenes are among the film’s strongest: Chaplin struggling to get out of bed, and then using farm animals as a range of kitchen appliances – milking a cow into his coffee, holding a chicken over a frying pan until it drops an egg, and so on. As the story progresses it tends to lose a bit of energy: Chaplin pursues Purviance’s beautiful maid against the flirtations of a rich city visitor. His character’s pathetic attempts to fake being a richer man do represent an interesting attempt at including sadness among the comedy, but also seem to ridicule him quite cruelly.

There is also an interesting flirtation with dream sequences. Knocked out in a field, Chaplin dreams an entire musical sequence with a group of attractive nymphs. It is a wonderful sequence – one of the film’s strengths – and foreshadows more extensive and elaborate scenes in future works.

On a joke-to-joke level, however, Chaplin really is difficult to beat. Relying, via silent cinema, on physical comedy, his material largely doesn’t date. Slapstick that works in 1919 clearly still works more than one hundred years later.