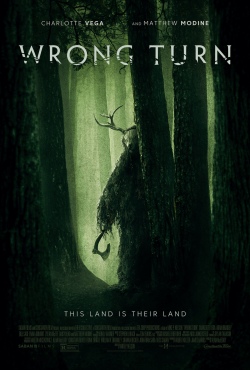 Six friends go hiking along Virginia’s Appalachian trail, but their curiosity soon leads to deadly consequences in Wrong Turn – a new thriller directed by Mike P. Nelson (The Domestics). It is technically a remake of the 2003 horror film of the same name and even shares the same writer – Alan B. McElroy – but varies from the original so widely that to call it a remake is honestly doing it a mild injustice. While the 2003 version focused on a group of young Americans under siege from deformed cannibals, this new iteration follows a much more inventive and interesting path.

The film actually begins on Scott Shaw (Matthew Modine), a worried father following after his missing daughter Jen (Charlotte Vega). He has tracked her to a small town in Virginia, after which she and her friends apparently went hiking in the mountains. They have not been seen for six weeks. Events then jump back in time to reveal what actually happened to Jen and her friends. This is not a simple framing narrative: by the film’s third act both past and present have coincided. This slightly more complex structure than usual helps the film a great deal.

By the time the six hikers get into trouble in the forest their situation has been made clear and emotional stakes have been prepared. Each of the characters also gets their own moments to be established, avoiding the common pitfall of such thrillers where much of the cast simply act as fodder for whatever is stalking them. It all creates a much stronger set-up for when the violent horror elements arrive. The individual performances are also effective, feeling a little more realistic than the genre standard. Vega is a stand-out as Jen, as are Emma Dumont and Adrian Favela among Jen’s friends. Matthew Modine is a welcome presence too; this underrated actor seems to be enjoyed a mild renaissance post-Stranger Things.

The exact nature of the threat that has been creeping up on Jen and her friends is a pleasant surprise, and more effective than the Deliverance-inspired horrors of the original film. It is not faultless, however, and a key flaw in the film is that it is consistently better at inventing great story elements than it is at actually using them. Several times the potential for gripping scenes and horror sequences goes unfulfilled.

Unfortunately a reasonably strong first and second act lead to a third that generally fails its characters. The situation in which the hikers are found six weeks into their ordeal feels more like one-to-two years – in the context of a month and a half it all feels rushed and unrealistic. The film also takes a little too long to wind up, with a prolonged and deeply unnecessary epilogue that adds nothing to the overall picture.

Horror fans will have a lot of fun with the film’s briefly seen but brutally realistic gore. Everybody else can be reassured that such shots and moments are mercifully short. This is violence designed to make the viewer flinch, and is very effective in that regard.

A disappointing climax is really the only downside to this generally effective and entertaining rural thriller. It is the kind of flaw that exacerbates disappointment: the writer, director, cast and crew are so close. That said, for the seventh instalment of a horror franchise that has been largely running direct to DVD this is a laudable achievement.