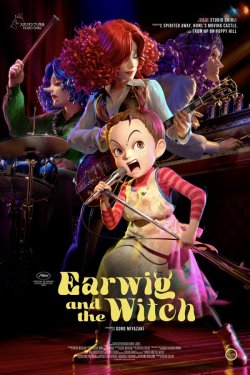 Since the mid-1980s Studio Ghibli has been the world’s premier production house for animated films. Led by directors Hayao Miyazaki and the late Isao Takahata, Ghibli has produced more than 20 features in an unparalleled run of creative successes. They have in all honesty ranged from the very good to some of the greatest films of all time.

It has been seven years since the studio’s last film – Hiromasa Yonebayashi’s When Marnie Was There – with just the distribution of French feature The Red Turtle keeping the lights on at the famed company. Now a new film has finally emerged: Earwig and the Witch, an adaptation of Diana Wynne Jones (Howl’s Moving Castle) directed by Miyazaki’s son Goro. I suppose that legendary run of success had to end some time.

Earwig and the Witch was funded by broadcaster NHK as a New Year’s special, but has been released theatrically outside of Japan. It does not deserve to be. It is without much argument the weakest Ghibli production ever released. If it was simply an animated film from some generic, ‘no-name’ production house, one would bristle at paying for such an obviously substandard seat-filler. Coming from Ghibli – and from Goro Miyazaki, whose last film From Up on Poppy Hill was a particularly strong work – it is a jaw-dropping debacle. It is the studio’s first computer-animated feature, and betrays a total lack of either experience in the medium or a sense of quality control. Its story is overly familiar, badly paced, and abruptly truncated. Its sense of motion is stiff and mechanical. Worst of all, it seems relatively charmless – this from the studio that gave the world Jiji the cat, the tanuki of Pom Poko, Totoro, and the Catbus.

Earwig (voiced in English by Taylor Paige Henderson) is a baby left at an orphanage by her  mother, who is on the run from a cabal of 12 powerful witches. Nearly a decade later Earwig – now named Erica – is adopted by another witch, Bella Yaga (Vanessa Marshall), and taken away to act as her assistant and cook to the mysterious and demonic Mandrake (Richard E. Grant).

Take note of that cabal of powerful witches, because you never see them in Earwig and the Witch. Also note the rock band assembled in flashbacks and the film’s poster. They never properly appear. The scene on the poster does not actually occur in the film at all. What is left is a hodge podge of older, better Ghibli productions: a young girl training to be a witch (Kiki’s Delivery Service), and living with powerful and magical entities (Howl’s Moving Castle). On her way she befriends a talking black cat (Kiki‘s again), and is forced to work for a powerful witch (Spirited Away). Earwig is a bizarre combination of reheated tropes and character designs, mixed with a story that largely consists of small domestic life while constantly referring to more interesting events happening in other places or times.

Moment to moment the film does work. Even when repeating itself there is some excellent design work, and rich sense of colour throughout. Satoshi Takebe’s musical soundtrack presents a sharp and invigorating contrast to Ghibli’s typical orchestral scores. It is a terrible shame that the film’s musical elements, which are hinted at throughout, are never properly brought into the foreground. As it stands it is the film’s strongest asset, including a real-life super group assembled to perform its handful of songs; the group includes Hiroki Kamemoto (Glim Spanky), Kavka Shishido (The News), and Kiyokazu Takano (Mrs Green Apple). The film hints and alludes to a wonderful back story of 1970s-inspired rock, with brief depictions of the band in question promising a quite sensational combination of music, magic, and animation.

Then the film simply stops. There is no climax of which to speak, and certainly no closure. Earwig simply runs for about 75 minutes of foreshadowing and scene-setting, and then rolls some credits. It creates an effect so jarring and unsatisfactory that it seems near-impossible to exit the theatre in a good mood. Imagine if you read this review and suddenly