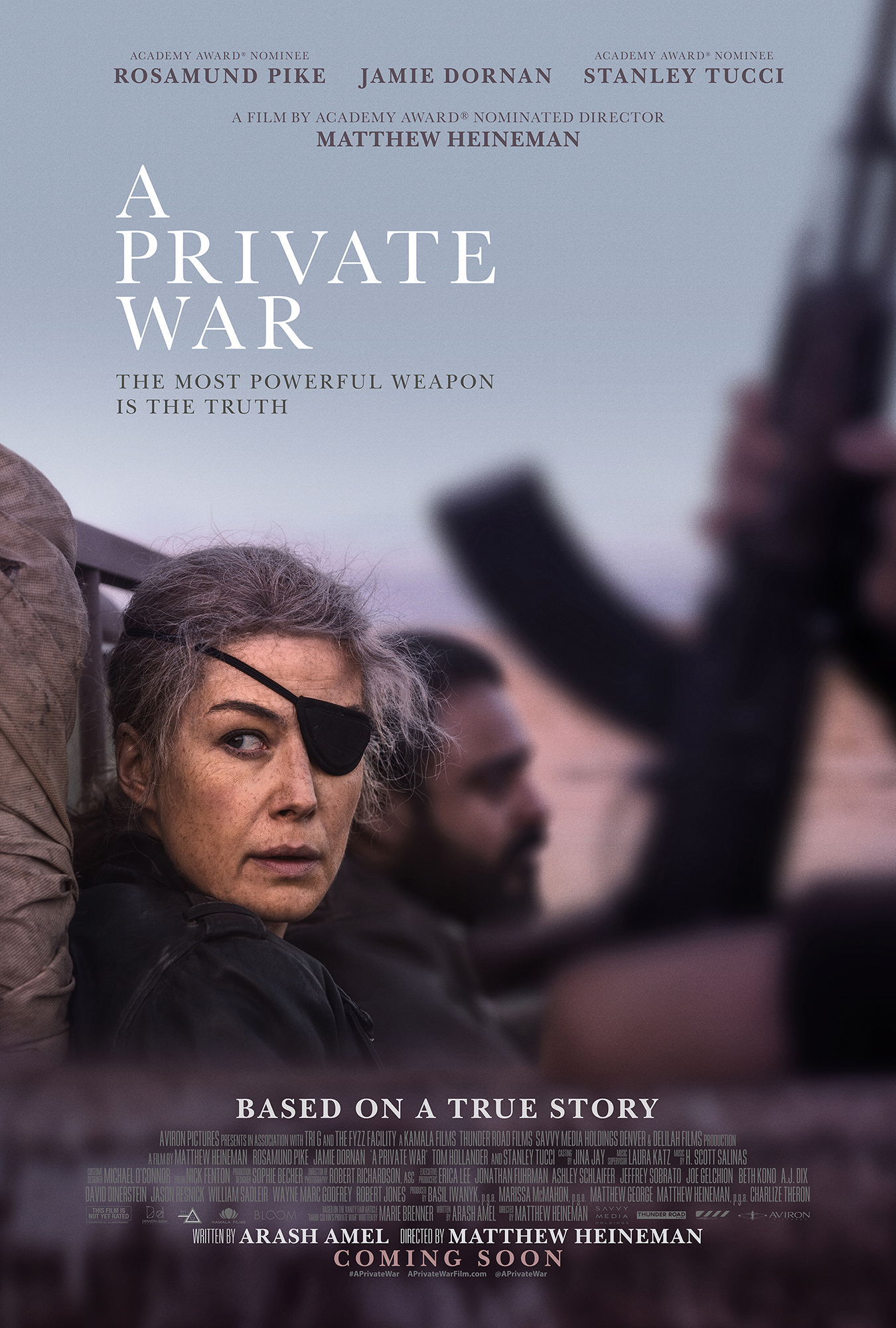 Documentary filmmaker Matthew Heineman made his narrative feature debut in 2018 with A Private War. It is a biographical film about American journalist Marie Colvin whose war reporting for London’s Sunday Times earned her enormous international acclaim. It is a sensational work of cinema: aggressively told and emotionally powerful.

After losing an eye in Sri Lanka, Marie Colvin (Rosamund Pike) continues travelling from one war zone to another with her photographer Paul Conroy (Jamie Dornan). As the psychological toll of her experience grows, she drives herself harder and harder – to the consternation of her editor Sean Ryan (Tom Hollander).

The real-life career of Marie Colvin makes for an obvious subject matter for dramatic treatment, moving as it does from violent conflicts in Sri Lanka, Iraq, Afghanistan, and Syria. The exact purpose for such an adaptation can vary, however, depending on what part of Colvin’s story a production chooses to tell. Here Heineman chooses to focus on the psychological cost of war reporting, and does so with profound effect. As Colvin, Rosamund Pike is absolutely sensational, delivering far and away the best acting of her career. She portrays her character’s growing trauma with sensitivity and thought. Colvin never comes across as weak, but neither is she some form of idealised ‘super-journalist’. Instead it is real and deeply affecting. The film rides largely on Pike’s performance, and she absolutely succeeds in that regard.

Tom Hollander, an actor I have long admired, gets a tremendous supporting role in Sean Ryan. He is often pigeon-holed into varieties of ‘upper class twit’ roles, and it is great to see him play with such a driven, responsible, and grounded character for a change. He is one of Britain’s most underrated actors. Jamie Dornan is also strong as soldier-turned-photographer Paul Conroy. Despite his prominent billing, Stanley Tucci’s part in honestly more of an extended cameo than a proper supporting role. It is, however, always pleasant to see him on screen.

There is a particular strong effect in how Heineman allows each reported conflict to bleed into the next. Sri Lanka and Iraq’s conflicts are not resolved, nor Afghanistans or Syrias. Instead the film flows from one hail of gunfire to the next, peppered with explosions, and littered with innocent and terrified civilians. The point of the film is not to explain each violent incursion but rather to accentuate the terrible inhumanity of war and – as the real Colvin was always keen to press on her readers – the cost paid out on the innocent bystanders.

One could criticise the film for not expanding on Colvin’s back story and character, but that would detract from its powerful and aggressive focus on the emotional tolls that battered her harder and harder through her career. This is a film about costs – not in money but lives – and that tightly presented agenda simply makes it all the more powerful. Combined with Pike’s exceptional acting, it is an excellent piece of work. How Pike did not receive an Oscar nomination for this, let alone a win, beggars belief.