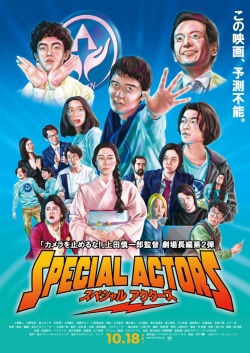 Kazuto (Kazuto Osawa) is an under-confident security guard with a tendency to faint when faced with confrontation. Behind on his rent and facing dismissal from his job for not disclosing his condition, Kazuto runs into his estranged brother Hiroki (Hiroki Kono) and learns of his newfound career: performing as an actor in real-life situations.

Special Actors is a 2019 comedy directed by Shinichirou Ueda (One Cut of the Dead). It works with a brilliant comedic premise: an actor’s agency that takes real-life bookings from members of the public. Want to impress a girlfriend by beating up a hoodlum? You can hire an actor for that. Want to have a few more mourners at a corporate memorial service? Your cast is available. Kazuto is drawn into this troupe of actors by his brother, and finds himself assigned to a case where a charismatic cult is threatening to defraud a young woman out of her inherited traditional inn. It makes for an oddly theatrical combination of detective story and heist thriller, with the staff of the Special Actors agency infiltrating the cult and attempting to find evidence to prove their underhanded nature. Style-wise it feels very typically Japanese: a little over-the-top and exaggerated, somewhat silly, and just a tiny bit salacious. In all honesty Ueda’s script, which was workshopped with his cast, is rather uneven. That cast, however, work their respective characters well and give everything a much-needed lift.

Kazuto Otawa plays an overly familiar protagonist. He is nervous and uncertain, particularly as his newfound profession puts him exactly into the situations that cause his fainting episodes. Around him are a cast of loveable eccentrics, as one typically sees in this sort of comedy. A particular highlight is Yaeko Kiwase, who plays one of Special Actors’ contract performers, who inhabits her assigned roles with perhaps a little too much enthusiasm and gusto.

The strange real-life actor’s agency is actually much closer to reality than many foreign viewers may realise. One can already hire actors for these sorts of tasks today, including mourning at funerals and pretending to be various friends, lovers, and spouses at family gatherings and school reunions. It is a peculiarly Japanese field that has already inspired multiple drama and comedy features as well, including Mayu Akiyama’s Rent-a-Friend (2018) which this website reviewed earlier this year. At first it seems an odd kind of an industry, but given the social pressures and isolated lifestyle of many Japanese people perhaps it is not as odd as Western minds might think.

The local response to Special Actors has been relatively lukewarm, since it is ultimately a fairly standard Japanese comedy, and Ueda’s earlier film One Cut of the Dead was a particularly popular festival and cult release. Ignoring that comparison shows this as a perfectly enjoyable film in its own right: it boasts a good heart, enjoyable characters, and a narrative that still manages to throw its audience a curve ball from time to time.