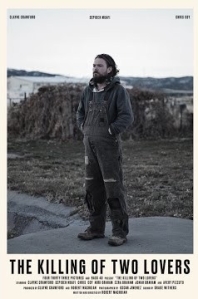 A woman and a man lie asleep in bed, unaware that another man stands over them, gun held ready to shoot them both. This second man changes his mind, sneaks out of a window and runs away down the street. It is a bleak as winter opening statement for a new independent American drama: Robert Machoian’s The Killing of Two Lovers.

The running man is David (Clayne Crawford), a labourer in a tiny Utah township. He and his wife Niki (Sepideh Moafi) have separated but agreed to work on saving their marriage – if nothing else for the sake of their four children. This threatening first sequence makes it starkly clear just how badly that reconciliation process is going.

What appears to be a confronting and unpleasant thriller about evil ex-husbands turns out to be a much more complex meditation on divorce, parenthood, and depression. Machoian’s screenplay sets it up for one hell of a challenge, positioning David in a near-unforgivable situation and then backtracking him from the precipice to reveal the humanity behind an inhuman impulse. Clayne Crawford offers up a tightly-wound performance packed with male rage, and at the same time a hollow and wounded centre underneath. Does such internal conflict redeem a character from planning terrible things? No, but does make him a fascinating protagonist to watch.

Sepideh Moafi is very strong in the opposite role of Niki. While it is immediately clear that David is clinging on to the dream of reconciling their marriage, Niki has all but given up already. She is awkward around him when they meet, and is already seeing someone else (Derek, played by the briefly seen but well-played by Chris Coy). Scenes shared between them transform the film into a tragedy of miscommunicated feelings. Neither partner wants the same things. They can speak to each other, but not productively talk. While their three young sons are taking the breakdown in their stride, older sister Jesse (Avery Pizzuto) is having a much harder time of it. Pizzuto performs the role smartly, digging in to make realism out of what could easily have been played as a stereotype.

There is a harsh, claustrophobic sense to the film. It is a genuinely small town David lives in, where seemingly every single person is on a first-name basis with everybody else – not easy for someone quietly contemplating murder. Oscar Ignacio Jimenez’s photography focuses on long, uneasy takes, and an Academy-style 4:3 aspect ratio that deliberately locks key information out of frame. Peter Albrechtsen provides a minimalist and harshly mechanical score. The wintry setting – and a horizon peaked with mountains – only enhances those deep-seeded feelings of a world closing in from the sides. There is genuine talent behind this typically loose, hand-held style of independent film.

Machoian takes a big risk with the protagonist he has developed, with an enormous shadow hanging over a film that asks the viewer to sympathise with a man engaging in stalking and vacillating over murder. The film plays in a frighteningly dark area, but carefully centres everything on character, emotion, and a blunt depiction of human nature. The Killing of Two Lovers paints a strong, devastating portrait.

The Killing of Two Lovers has been streaming at this year’s Melbourne International Film Festival. Click here for more information.