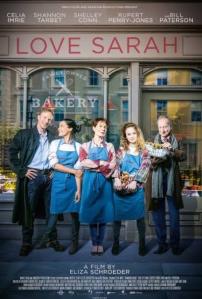 When a woman named Sarah is killed in an accident, she leaves family and friends behind to grieve, including her distanced mother Mimi (Celia Imrie), best friend and business partner Isabella (Shelley Conn), and her daughter Clarissa (Shannon Tarbet). As they gather together to remember Sarah, Clarissa announces a plan: finish setting up the bakery that Sarah was planning when she died.

Out of the sad, closed-down cinemas of Australia comes a limited re-opening in the shape of Love Sarah, a new British romantic comedy by director Eliza Schroeder. In many ways it is a perfect film with which to tentatively re-start things under the shadow of the COVID-19 pandemic. It is breezy and optimistic, and rather inconsequential and fluffy. There is nothing here that feels remotely original, and no surprises to be had as its overly-familiar story unfolds. If you are after something that’s much happier than the world into which it has been released, but not so complex that you have to dedicate active thinking to watch it, this could be the film for you.

So there are basically two directions one can take in judging Love Sarah. The first is to acknowledge that this is one of many uplifting and relatively charming British films that are released year in, year out. It does exactly what it says on the tin, and for those viewers who delight in a little breeze of warm romance and comedy and a touch of English eccentricity will be well entertained here. The film is like a warm winter blanket, and for a particular demographic will tick all of the right boxes and make for a very pleasant afternoon diversion.

The cast are well-suited to the task as well, particularly the always-reliable Celia Imrie and Bill Paterson as they engage in a mature-age romance that is both welcome, given the tone of the overall film, and really rather sweet.

Now there is the second direction one could take. For those not easily entertained by the British light comedy genre, Love Sarah may wind up feeling like a cinema equivalent of fingers on a blackboard. It is almost offensively ordinary. Its story is predictable in the most tedious of ways. Where it thinks it is sweet and charming it is appallingly over-sugared and under-cooked. It is safe and dull, ascribing to every hackneyed trope and cliche about privileged and self-involved upper-middle class eccentrics. The film even turns on the revelation that people from different cultures eat different types of food.

Honestly though, so what? Love Sarah, for all its faults, is the type of film that does not lie to its audience. It does not pretend to be something it is not. Quite frankly, if you head into a theatre to watch it and do not enjoy what you see, it is entirely your fault. The film does an exceptional job of knowing its market and giving them exactly what they demand. That is a beautiful thing.