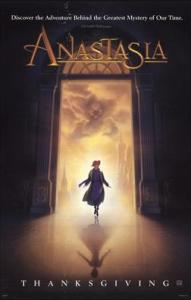 Anya (Meg Ryan) is an orphaned young woman in 1920s Russia who is drawn into a scheme to impersonate the missing princess Anastasia and defraud her grandmother.

In 1988 Don Bluth’s film The Land Before Time had been an international smash hit, and paired with An American Tail two years before it cemented Bluth’s status as a genuine challenger to Walt Disney Pictures’ supremacy in American animation. His 1989 follow-up All Dogs Go to Heaven did not share in that commercial success, and only led to a string of box office failures for Bluth, including Rock’a’Doodle (1991), A Troll in Central Park (1994), and The Pebble and the Penguin (1995). Despite these failures, in 1994 Bluth and his partner Gary Goldman signed a contract with 20th Century Fox to head its new animation studio. They were charged with picking one of Fox’s classic live-action titles and adapting it into an animated feature. While they initially suggested The King and I – which was ultimately directed by Richard Rich for Morgan Creek in 1999 – they adapted the 1956 Anatole Litvak drama Anastasia instead. Their end result, released in 1997, was the most successful film of Bluth and Goldman’s careers and the highest-earning animated feature Fox had ever released.

It has to be said that the story of Anastasia Nikolaevna, who was murdered by Bolsheviks along with her entire family in 1918, is a somewhat unusual basis for an animated musical. Rumours persisted for many years that she had survived, and multiple woman claimed to be her over the succeeding years, and it is on this basis that Anastasia operates. It oddly – and, it must be said, effectively – turns real-life fraud and deception into a charming family-oriented adventure.

It is beautifully crafted as well, combining smoothly rotoscoped and hand-drawn animation with effective computer-generated images. There is a heightened sense of realism that is quite unusual for American animation, but it still manages to stay on the right side of abstraction to include supernatural elements without disturbing its overall tone.

Tone is one thing, but story is another: parts of the film feel shoe-horned into an unsuitable narrative. The film has a traditional villain in the shape of Rasputin – a real-life figure re-imagined into a ghostly apparition – but fails to give him a proper motivation or involve him directly in the film as it develops. As a result, his confrontation with Anya during the climax feels oddly hollow; it is the first time since childhood that she has met him, since he has spent the entire film observing passively or sending demonic proxies. Similarly Rasputin gets a talking animal sidekick – Bartok the bat – who does not serve a sufficient role in the story. All of Bluth’s films seem to struggle with a tonal or structural conflict. His personal desires for a dark and more complex type of animated feature always seem to collide with industry demands, trapping his works awkwardly between two styles. It is a deep shame he was never given the freedom to make a feature on his own terms.

Voice performances are strong, and include the now-standard range of famous actors; in this case Meg Ryan, John Cusack, Kelsey Grammer, and Christopher Lloyd. Angela Lansbury is a particular delight, but she very nearly always is.

The film also boats a strong and enjoyable score from David Newman, and an effective series of musical numbers by Lynn Ahrens and Stephen Flaherty. It is no surprise that the film has since been adapted into a live musical; Ahrens and Flaherty’s work absolutely deserves the additional exposure.

Anastasia is imperfect, but how many films are? As a triumphant return to form after a string of failures, it stands as one of Bluth’s finest works. The film shines with a nostalgic glow for a certain generation of children, but for once that nostalgia is actually backed by a well-made and beautiful artful piece of cinema. This is a lovely work of animation that deserves to be remembered, not to mention to preserve Don Bluth’s remarkable legacy.