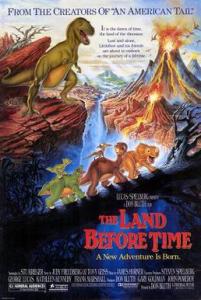 Littlefoot is a young Apatosaurus when an earthquake disrupts his family’s migration, and a Tyrannosaurus Rex attack kills his mother. Orphaned and lost, he meets up with four other abandoned young dinosaurs and undertakes the long journey to safety – with the Tyrannosaurus in pursuit.

The commercial success of An American Tail led Steven Spielberg – along with George Lucas – to commission another animated feature from Don Bluth. This time the desired focus was on dinosaurs, leading Bluth to direct this Bambi-like children’s film about orphaned and separated baby dinosaurs travelling to re-connect with their adult herds.

The end result, released in 1988 and breaking An American Tail‘s record for non-Disney box office, is a rather strange film. It is pitched to a much younger audience than its predecessor; except for all of the moments and sequences that seem aimed well above the preschool market. The result is a mish-mash of a cloyingly simplistic narrative with nightmare-inducing terrors.

That is not necessarily a bad thing. It is often a good thing for young audiences to be tested with challenging material. It can be beneficial to stretch one’s limits. The specific problem here is that gulf between the simple scenes of friendship and co-operation, and the scenes of life-and-death peril, feels enormous. At least Bambi allowed the protagonist’s mother the dignity of dying off-screen.

Background paintings throughout the film give everything a rich, 1940s aesthetic – as was the case in An American Tail. Here the effect feels even more pronounced. Sadly the character animation seems to have taken a step back, with curious colouring choices and some visual inconsistencies. The bulk of the movie is deliberately coloured in dark and forbidding hues which, like the violent content, works against the overall juvenile tone of the film. Even more striking in its nostalgic tone is James Horner’s orchestral score. It feels very different from his typical style, echoing classical composers like Tchaikovsky more than anything contemporary. It may come as something of a surprise, but this is one of Horner’s finest-ever film scores.

Anyone hoping for scientific accuracy will probably be disappointed, even accounting for its 1988 production. Once scene depicts Littlefoot crossing paths with a couple of Dimetrodons – a non-dinosaur species separated by 130 million years. Even among the film’s main characters it pairs an Apatosaurus (150m BCE) with a Triceratops (68m BCE). It is open to debate how much this sort of accuracy matters in a film for children; after all, no one overly criticises Spielberg’s own Jurassic Park for similar mistakes. Ultimately it simply feels a little disappointing. An opportunity to entertain and educate has been completely missed.

The Land Before Time was a popular commercial hit back in 1988, and was followed by a seemingly unending line of direct-to-video sequels (none of which involved Bluth). That alone shows off that the film was embraced by its target audience. At the same time it is a strange mess, tonally all over the place with an animation quality visibly below that of An American Tail. It is really only of interest to very young children, but at the same time it is debatable whether or not it is suited to them.