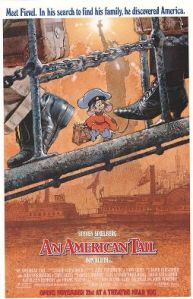 Welcome to Don Bluth week; or, at least, welcome to the first in a series of reviews of the films of American animation director Don Bluth. He started his career as an animator for Walt Disney Studios on Sleeping Beauty, The Sword in the Stone, Robin Hood, and The Rescuers (among others). Dissatisfied with what he felt were falling standards at Disney, he quit the company to set up his own company. His first directorial feature was The Secret of NIMH (1982), and he went on to direct a series of animated features including An American Tail (1986), The Land Before Time (1988), All Dogs go to Heaven (1989), Anastasia (1997), and Titan AE (2000).

It is worth devoting attention to Bluth’s works because he essentially expanded American feature animation beyond Walt Disney. While there had been plenty of non-Disney animated films released before, they were generally cheaply made and few and far between. Bluth’s works – particularly The Land Before Time and An American Tail – demonstrated audiences would see non-Disney films in the cinema, and his competing success startled Disney executives enough for them to treat their own product seriously again. There is an extent to which Bluth’s films triggered the so-called “Disney Renaissance” – a period of creativity from The Little Mermaid to Tarzan that has arguably never been surpassed at Disney since. Today feature animation is a billion-dollar business for Hollywood, and to a large degree audiences – and production studios – have Bluth to thank for it.

I’m choosing to start with Bluth’s first significant hit, An American Tail. Executive produced by Steven Spielberg and distributed by Universal Pictures, at the time it became the most successful non-Disney feature animation ever made.

Fievel Mouskewicz (Phillip Glasser) is a young Russian mouse whose home is burned down after a group of Cossack cats undertake a violent rampage through town. Boarding a ship with his family to America, he is washed overboard and stranded in New York. While fruitlessly searching for his parents, Fievel becomes involved in a scheme by the city’s mice to drive out the cats that are hunting them down.

Bluth really embraces the old-fashioned Disney aesthetic of his youth. An American Tail is richly enhanced by warm, painterly backgrounds, while the characters are animated with a properly inked technique – by this point Disney had long since shifted to photocopying pencilled frames in high contrast to save time and money. The characters are also fully animated; with each frame the animators have re-drawn the entire body, rather than simply the part of the body that is moving. This gives everything a slightly shimmery patina that feels more like animation from the 1940s than the 1980s.

The film also stands out – and likely reveals Spielberg’s influence over its development – by focusing on the 19th century Russian Jewish diaspora. Anti-Jewish pogroms were a regular occurrence in the 1880s, and the film’s first act embraces this oddly mature historical context to drive the Mouskewicz family to America. It is a truly bizarre choice for a children’s film. In the same year Walt Disney Pictures released The Great Mouse Detective, a charming adaptation of Sherlock Holmes in which Holmes and Watson are mice and Moriarty is a rat. By contrast An American Tail details a religious minority escaping violent persecution, followed by an adaptation of the immigrant experience in New York’s five boroughs. Throw in a few particularly tense, frightening, and bleak moments during the film, and one wonders who precisely Bluth and Spielberg thought An American Tail was for.

Representing Jews as mice and their oppressors as cats earned the film an accusation of plagiarism by cartoonist Art Spiegelman, whose then-unfinished graphic novel Maus was using the exact same technique to reflect Jews and Nazis during the Holocaust.

The film also both introduces the concept of class, and then has those classes unite in a mouse-versus-cat turf war. There’s a light sense of satire about Gussie Mausheimer (Madeline Kahn), a rich socialite mouse and anti-cat campaigner, that feels particularly unexpected. Whether intentionally or otherwise, An American Tail does seem to spread the opinion that one should ‘know their place’.

Music is a key highlight, with James Horner providing a particularly strong score. Anyone familiar with Horner for his post-1990 work may be surprised at how unlike his standard style it is. It has a wonderful old-fashioned tone that matches the old-fashioned animation beautifully. The film’s songs are also strong, particularly the rousing “No Cats in America” and the ballad “Somewhere Out There”.

For animation fans, revisiting An American Tail is a worthy exercise, but it is also a somewhat perplexing one. The tone, the content, the characters: everything feels just very slightly out of kilter thanks to Bluth’s approach. As it ages, it stands out even further from the pack. It was followed by a 1991 sequel, Fievel Goes West, but that was produced without Bluth’s participation.