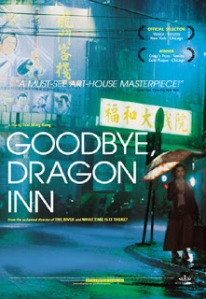 A run-down Taipei cinema screens its final movie: King Hu’s legendary wuxia film Dragon Inn. While the film plays the cinema’s disabled cashier (Chen Shiang-chyi) slowly goes about her work, young gay men awkwardly use the theatre as a place to hook up, and the cinema itself may be populated by ghosts.

Goodbye, Dragon Inn is a 2003 drama by Taiwanese director Tsai Ming-liang. It is an odd little piece, told with a real minimum of drama and narrative. At the same time it is oddly compelling, like you are stepping into someone else’s real life and not really being told a story at all. There’s a concept in dining known as ‘slow food’, in which local ingredients and cooking methods are encouraged in defiance of the commercialised ‘fast food’ culture that dominates dining around the world. It makes me wonder if there is such a thing as ‘slow cinema’: a kind of film that wallows in its own local culture, and really takes its time to immerse into it rather than rush around telling a story with characters and a driving narrative. If there is such a thing, I think Goodbye, Dragon Inn might be a potential poster child.

Cinemas are odd places: everybody sitting in silence together, facing the same direction, watching a fictional narrative projected onto a wall. There’s a shared emotional experience in each session, but it’s an experience that nobody really talks or thinks about once it’s over. Watching a movie in which people are primarily sitting and watching a movie feels weirdly recursive. Can we get an emotional experience out of watching someone else getting an emotional experience? It leaves Tsai’s film feeling less like an immersive work of cinema and more like a light kind of curiosity piece. It’s intriguing, but inevitable sedate. Occasionally – particularly in the long takes of the cashier limping from room to room – it feels deliberately maddening.

What little story there is involves a young Japanese man (Kiyonobu Mitamura) who arrives at the cinema to cruise for a gay lover. He awkwardly moves from seat to seat, noticing a small group of patrons sparsely distributed across the theatre. There’s an old man with his grandson – the old man being played by Miao Tien, who appeared in the original Dragon Inn. Also present is Shih Chun, another Dragon Inn alumni. The film’s most entertaining moments come from this young Japanese man awkwardly working his way around the theatre. One scene in particular sees him joining a short line of men, all cruising in the men’s room, none of them bold enough to make the first move – so they all stand impotently in a row at the urinals.

The audio of the film being screened aside, Goodbye, Dragon Inn is practically a silent movie. It takes a full 40 minutes for anybody to say anything, and even then it’s only a few sentences before the characters all fall silent again. It is a film that does have an effect, but it requires a hell of a lot of patience.

The choice of Dragon Inn as the cinema’s final screening is clearly deliberate: King Hu’s groundbreaking martial arts film revolutionised the Chinese ‘wuxia’ genre, adding a raft of now-traditional story and character elements, and largely dictating the stylistic conventions for the genre ever since. It was Taiwan’s first major international movie hit, breaking box office records across Asia at the time (it was first released in 1967). Showcasing Taiwan’s first major cinema hit on the last night of a closing theatre gives the film a sort of patriotic nostalgia, and a yearning for the successes of the past. While people in Taiwan clearly still went to the cinema in 2003, Taiwanese films seemed to lack the local success and profile of equivalent domestic works in China, Hong Kong, South Korea, or Japan. ‘No one goes to cinema any more,’ complains one character before the film ends. What Tsai seems to have made here is a slow, thoughtful, but ultimately slightly testing wake. Thankfully the situation seemed to have improved enormously over the past two decades; the quality of Tsai’s work remains.

This review was originally published at The Angriest on 4 October 2016.