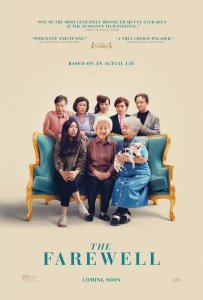 Billi (Awkwafina) is a struggling writer living in the USA. She learns from her parents that her “Nai Nai”, or paternal grandmother (Zhao Shuzen),has developed terminal cancer and has only a few months to live. As her family gathers in Changchun to see Nai Nai one more time, Billi is horrified to learn that the only person not told of the diagnosis is Nai Nai herself. ‘Chinese people have a saying: when people get cancer, they die,’ explains Billi’s mother, ‘but it’s not the cancer that kills them, it’s the fear.’

Writer/director Lulu Wang pulls off a remarkable feat with The Farewell. Technically and structurally it is an American film. Tonally and culturally, however, it is Chinese through and through. At its core there is a conflict between American and Chinese traditions, and a fascinating ethical debate driven by contrasting cultures. From the standpoint of white English-speaking people, the idea of hiding Nai Nai’s illness from her is a repellent one. From A Chinese point of view it seems merciful, loving, and deeply kind. Wang does not deliver an easy answer, but powerfully presents arguments for both sides. No one seems wrong in the end, and no one becomes a villain. Whay we get instead is family conflict – familiar in any cultural context – and the emotional effects of such disagreements.

That all makes The Farewell sound like a morose chore. In truth the film comes packed with comedic beats and jokes. To enable the family to gather and see Nai Nai one last time, an entire fake wedding is dragged into existence. Everyone is forced to keep their respective sadness and upset a secret, and that ongoing deception brings as many laughs as it does tears. Of course for her own part Nai Nai strolls her way through the film naively believing she has a cold that will not shift, and her ignorance also delivers some wonderfully awkward comedy as well. Wang’s screenplay and direction delivers a perfect balance of comedy and drama, ultimately bringing a realistic and wonderfully appealing extended family to life.

The Farewell boasts uniformly excellent performances. Awkafina, who to date has provided full comedy roles in the likes of Crazy Rich Asians and Ocean’s 8, delivers career-best work as a woman caught between the culture of her birth and the culture in which she has grown up. Nowhere is this more clear than in an early set-up sequence as Billi walks down a New York street, interacting in English with the Americans around her yet talking to her grandmother in Chinese. Awkwafina’s work here points to a future career combining both comedy and drama in equal measure, and marks her out as of the must-see talents of the new decade.

It is great to see Tzi Ma gifted with a strong role as Billi’s father Haiyan. He has been a regular fixture in American film and television, most famously playing the villainous General Cheng Zhi in the popular television series 24. He has also co-starred in Arrival, Chain Reaction, Dante’s Peak, Rush Hour, The Campaign, and numerous other films. This is his best role, and he is both sympathetic and naturalistic.

Zhao Shuzen is superb as Nai Nai, an instinctively loveable character who brightens the film in every scene in which she appears. She performs her role entirely in Chinese, as indeed do most of the cast for most of the film. This truly is a fascinating blend of American and Chinese film, informed by both, blended effectively, and transformed into something truly unique of its own. This intimate tragi-comedy is one of the very best films of 2019.