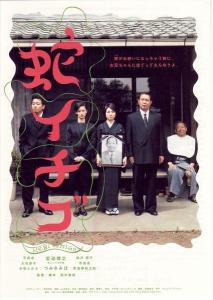 In suburban Tokyo, the seemingly idyllic Akechi family self-destructs. Daughter Tomoko (Miho Tsumiki) stresses over introducing her new boyfriend to the family. Son Shuji (Hiroyuki Miyasako) is a thief, long ostracized from his parents. Mother (Naoko Otani) is slowly going homicidal over caring full-time for her demented father-in-law. And Father (Sei Hiraizumi), seemingly an upper-ranking executive, has not worked in a year or more and lies to everyone while living off a combination of loan sharks and blackmailing former colleagues.

These characters make up the dispiriting and bleak cast of Wild Berries, the 2003 debut feature of writer/director Miwa Nishikawa. As a woman making commercial features in Japan, Nishikawa represents a comparative rarity. Women remain in a minority in filmmaking world-wide, but in Japan the situation is particularly harsh. Five years ago, out of an estimated 550 members of Japan’s Director’s Guild only 20 were women. Nishikawa broke into the industry as a mentee of the widely acclaimed Hirokazu Kore-eda, and he produced this debut feature. It is a tremendous start to one of Japan’s strongest directors – regardless of gender.

Structurally the film is a comedy. Layer upon layer of deception within the one family create a sudden avalanche of misfortune. The idea of a father faking his employment to his wife and daughter to avoid embarrassment seems like the stuff of farce. Awkward dinners with an upper class visitor dating the middle class Tomoko feel set to allow a silly comedy of manners. Instead the calamities and misfortunes are played dead-straight. There is humour to Nishikawa’s comedy, but it is a bleak and bitter score of laughs that gets delivered. It is structured for levity but presented with gravity.

Tomoko’s father represents the biggest gap between the man he claims to be and the man that he is. He leaves home each day, ostensibly to go to the office, and returns home in the evening complaining of long meetings and tedious colleagues. In truth he rides the Tokyo subway, and spends lunch-time blackmailing payments out of former colleagues with threats of telephoning their superiors and leaking each of their misdeeds. Notably his deception also involves leaving his wife to care for his elderly father – a deliberately grotesque figure purposefully-built to exhaust and frustrate her at every turn. As for Mother, her frustration with her father-in-law does reach a breaking point. When he unexpectedly passes away the audience has seen she is not entirely innocent in the circumstances of his death, and his funeral acts as the inciting moment to bring the domestic calm crashing down around the entire family.

There is an interesting contrast between Father and son Shuji. For Shuji it is the first time home in years, after being ousted by his Father over his criminal dealings. With his return, however, and Father’s joblessness revealed, who exactly is the worse person? The son who has always been open about his criminality, or the Father who judges the son while hiding his own crimes? Nishikawa develops the one-on-one relationships with each family member remarkably well.

The film is directed in a combination of traditionally static imagery and some more contemporary hand-held photography. Nishikawa keeps her story intimate and mostly confined to the family in their home. The charaterisation is strong and roles very well-performed. Miho Tsumiki is particularly strong as the reserved and buttoned-down Tomoko. Among the family members she is easily the least at fault, and her growing frustration is portrayed in deeply subtle and guarded ways. Hiroyuki Miyasako presents an enjoyable contrast as the loud and confident Shuji. As Mother, Naoko Otani provides an increasingly cracked and brittle persona that shows even the most nicely-presented people can be very different once the pretence is worn away.

Wild Berries is an excellent blend of comedy and drama, and a superb introduction to Miwa Nishikawa’s work. She remains one of Japan’s best contemporary filmmakers, and one well deserving of greater exposure both at home and across the world. As a small-scale character piece, Wild Berries is tough to beat.