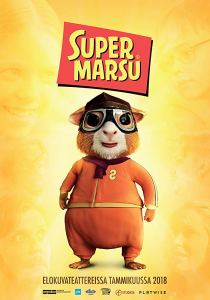 Emilia (Ella Jäppinen) lives in Finland with her mother and her mother’s new boyfriend. When her pet guinea pig bites her one day, it embues her with the powers of Super Furball: a four-foot tall guinea pig with super-strength and the power of flights. Using her new-found abilities, Emilia works to save a school of herring whose cove has become mysteriously polluted.

The mediocre film is the hardest to review, because it does nothing so good or bad as to deserve mentioning, and there is little in the middle about which to form any particularly interesting observation or argument. Finnish children’s film Super Furball (or Super Marsu in its native Finland) adapts a novel by Paula Noronen and makes – in its own minor way – one of the more unusual contributions to the super hero genre. Gifted with her powers by the god of guinea pigs, Emilia gains the abilities to fly and breathe underwater, super-strength, and a string of other minor abilities dependent on narrative demands. In return, she takes the shape of a four-foot-tall anthropomorphic rodent.

It is all achieved with passable visual effects and a reasonable amount of gusto, however nothing of note is ultimately done with this inventive and bizarre premise. It is all simply half-hearted: there is a weak and vague pro-environmental message, a minor threat posed by out-of-control talking herring, vague antagonists posed by a barely-seen industrialist and an overly stereotypical school bully. It draws a few obvious laughs here and there, but otherwise simply ambles along. This is the first film I have seen from director Joona Tena; I hope this is not their standard.

The film’s biggest challenge in international markets will be language: the young target market that might enjoy this film – it is rather upbeat and cheerful, and they will be largely new to all of the cliches anyway – will struggle with the subtitles. Outside of Finland, this strikes me as a deeply ordinary movie without an appropriate market to see it.

For what it is worth, Ella Jäppinen brings plenty of enthusiasm and appeal to the lead role of Emilia, and there is some amusement to be had from the massive god of guinea pigs sneaking around the forest – just out of sight of ordinary humans. The bottom line is that this is a film too ordinary to spend any time on. It is screening this coming week in Sydney and Melbourne as part of the Children’s International Film Festival. There are many interesting films screening from around the world; my honest advice is to see one of them instead. Super Furball simply does not justify the time spent in seeing it.