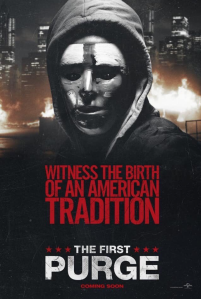 In the near future, the American economy has collapsed to the point where the freshly elected “New Founding Fathers of America” enact a social experiment: seal off New York’s Staten Island for 24 hours, during which time all crimes become legal. For the impoverished citizens of the island, each of whom is paid $5,000 to remain there during the experiment, it soon turns into a blood-soaked nightmare.

James DeMonaco’s three Purge films made for a great little trilogy, one that combined tense and blood thrills with blunt but effective political satire. With a gradually expanding scope, his films took a very real America in which rich white people thrive on the backs of the working classes and took it to a logical extreme: the rich literally murdering the working poor with impunity. The films never really received the attention that they deserved – here in Australia they didn’t even receive theatrical releases – but they did become a profitable exercise for producers Blumhouse and distributor Universal Pictures. Those profits in mind, it was inevitable that a fourth Purge would be produced. With the story effectively wrapped up by the end of The Purge: Election Year, this new installment jumps all the way back to the very beginning with the titular The First Purge. DeMonaco writes the film, with newcomer Gerard McMurray taking the directorial reins.

I have always felt fairly dubious about prequels. They tend to lack suspense, as any key plot developments are known by anybody that has seen the beginning of the original film. They tend to reveal the fine detail of a franchise premise without the ability to develop a suitably satisfying narrative of their own. They are, in the end, a mechanism to deliver trivia and very little else.

That is certainly the case here, where the film sets the Purge up as a weakly justified social experiment invented by psychologist Dr May Updale (Marisa Tomei) and enacted by the New Founding Fathers. The previous Purge films never had to justify the logic of the Purge, because they worked well as near-future allegory and a clear explanation was never really needed. It is in this context, and that sadly blows a hole in the film from the get-go: satire and realism don’t mix very well and the film’s premise begins to feel weak in a manner in which its predecessors’ never did. This weakness continues through scenes of characters in elaborate make-up: as the very first Purge, it seems unlikely that people would embrace the later traditions in spontaneous and fully-formed way. The film’s central twist – that the Founding Fathers are secretly sending in their own mercenaries to do the bulk of the killing – fails to have the desired effect because this is open knowledge to anybody who viewed the Purge sequels beforehand. It all feels a bit like a simplified re-hash for viewers too dim to grasp the satire expressed the first three times.

A standout in the film’s relatively perfunctory cast is Y’Lan Noel as local drug baron Dmitri. He is a difficult character to fully embrace – he is a violent gang leader and therefore something of an anti-hero – but Noel plays him with enthusiasm and a visceral sense of energy. Twenty years ago the character would easily have been played by Wesley Snipes, and Noel exhibits such a Snipes-like persona one can easily imagine him making a career of it in future action vehicles. He certainly deserves the opportunity.

The Purge previously got better and larger with each film. After the excellent Election Year, it is perhaps understandable that the franchise took a trip downwards. I was not, however, expecting a quality drop this pronounced. The First Purge is not a bad film, but it is certainly a mediocre one – and entirely unnecessary.