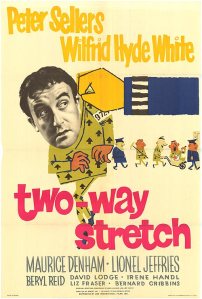 “Dodger” Lane (Peter Sellers) is a convicted robber days away from his prison release, along with his fellow criminals “Jelly” (David Lodge) and Lennie (Bernard Cribbins). When an old criminal associate leaks Dodger the opportunity for a million-pound take, he can’t resist taking up the opportunity. So long as he can break out of prison, commit the crime, and break back inside, he will have the perfect alibi – until a new prison officer (Lionel Jeffries) arrives to ruin everything.

Peter Sellers is best remembered today for either the long-running radio comedy series The Goon Show or for a string of major motion picture performances in films such as Being There, Dr Strangelove, Lolita or The Pink Panther franchise. Two-Way Stretch catches him somewhere in the middle: The Goon Show was at its end, but his most famous film roles lay before him. He gives a very simple and appealing performance here, playing an amiable and mischievous prison inmate who leads a comedic gang of three. He has the prison guards wrapped around his finger. He has breakfast delivered via a window and a rope each morning. It is not the sort of performance that is particularly memorable, but it exploits a strong sense of comic timing and helps with the film’s general broad and simple style of comedy.

Similarly well-performed comedy comes from Bernard Cribbins as the young, credulous inmate Lenny, and Lionel Jeffries as the bellowing, constantly suspicious Officer Crout. Taken as a whole, however, there is an immediate and glaring similarity to the 1974 BBC comedy series Porridge. That too featured a charismatic Cockney inmate who exploited the prison system, a younger and more vulnerable cellmate, and a similarly noisy and suspicious prison officer watching over them. The two share so many common elements that it is almost impossible to believe one was not partly inspired by the other.

The film is based on a wonderful premise: a criminal forming the perfect alibi by breaking out of prison, committing a crime, and then breaking back in to prison with nobody any the wiser. Sadly while the concept is strong the execution stumbles. A little too much time is spent setting up the characters and the situation, leaving the climactic heist to feel rather like an after-thought. What is presented on the screen is amiable, and generally rather funny – although understandably the humour creaks a little – but the sense of missed opportunities hangs all over it.

Two-Way Stretch remains a worthwhile view for fans of Sellers keen to see him in mid-career. It is also something of a treasure trove for fans of 20th century British entertainment, with a string of notable actors making an appearance; not just Cribbins and Jeffries, but also Maurice Denham, Beryl Reid, Warren Mitchell, and Wilfrid Hyde-White. It has the strong sense of a lazy Sunday afternoon about it; entertaining enough to be worth the viewing, but also typical enough of the genre to not matter too much if you happen to doze off.