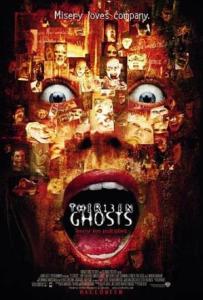 A grieving family inherit an avant-garde glass-walled mansion from an estranged uncle (F. Murray Abraham) only to discover it is actually a demonic machine, created in the 15th century and populated with a grotesque array of violent and mutilated ghosts. With the assistance of a vengeful psychic (Matthew Lillard) and an idealistic spiritualist (Embeth Davidtz) they race to escape before they lose their lives.

Thirteen Ghosts (spelled on-screen as Thirt13n Ghosts) is a 2001 remake of the 1960 William Castle horror film of the same name. It forms part of a strange little filmmaking project from the late 1990s and early 2000s, in which producers Joel Silver, Robert Zemeckis and Gilbert Adler – under the banner Dark Castle Entertainment – released contemporary remakes of William Castle’s films. The project lasted precisely two films – 1999’s The House on Haunted Hill and 2001’s Thirteen Ghosts – before the company shifted gears to focus on original horror movie projects instead.

I have not seen Castle’s original film, but despite its apparently bargain-basement production budget I am going to assume it is better than its remake. Thirteen Ghosts is a risible concoction of bland and forgettable characters, bad dialogue, genre stereotypes and gaudy, unconvincing prosthetic make-up. It occasionally missteps in a slightly interesting direction, but quickly corrects itself. What glimmers of interesting ideas and imagery it has feel lifted from a better Clive Barker movie.

The production design, to be fair, is fairly impressive, with the haunted mansion designed like a grand-scale puzzle box. Its glass walls are inscribed with latin charms and spells, and the manner in which they constantly shift and re-arrange themselves reminds one not only of Hellraiser but Vincenzo Natali’s excellent low-budget film Cube as well. Sadly a solid piece of set design cannot save a movie, but to his credit production designer Sean Hargreaves does his best anyway.

There are two kinds of actors in the film. There are those who simply give relatively weak performances, like American Pie star Shannon Elizabeth and Scream alumnus Matthew Lillard. Alec Roberts is particularly awful as Robbie, the young son of the family, but then it hardly seems his fault – what sort of horror movie feels the need to include a precocious child for comic relief? The other kind of actors are the likes of Tony Shalhoub, Embeth Davidtz and F. Murray Abraham, all of whom are much too talented and respectable for films such as these. Either they had tax debts desperately needing repaid, or they were simply paid a lot of money, or perhaps they simply had a few weeks spare and were not fussy about maintaining a quality career. Whatever the reason it is a shame none of them get anything worthwhile to say or do.

The titular ghosts have potential, but that potential is never realised. They come across as rather tacky rather than disturbing. To a large degree I think the film falls between two stools. There is potential in the story for it to be a particularly dark and violent horror film. There is also potential for it to push in the other direction and be a sort of safe-for-families spooky kind of ghost movie. As released, Thirteen Ghosts seems stuck somewhere in the middle: too safe and silly for the hardcore horror audience and too violent and horrific for kids. In the end it simply feels like a misfire; one easily passed over in favour of something decent. Or even average.