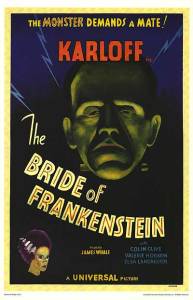 As Henry Frankenstein (Colin Clive) is pulled from the wreckage of the burned-out windmill, so too does his monster (Boris Karloff) survive. As the latter wanders the countryside in search of companionship and peace from persecution, the former finds himself forced by the insidious Doctor Pretorius (Ernest Thesiger) to continue his experiments into creating life from dead bodies.

Produced four years after Frankenstein, James Whale’s 1935 sequel Bride of Frankenstein continues the story of Frankenstein and his monstrous creation in an unexpected dual narrative that only winds itself together during the film’s final act. It is commonly regarded as a rare sequel that is superior to the original; I am not entirely convinced that is the case. While Bride certainly demonstrates a surer directorial hand and is technically superior, it presents a different enough take on the characters are the material to feel more like an equal than a substantively better film. Whale’s first Frankenstein offers a much more streamlined and pure take of Mary Shelley’s novel, whereas his sequel diverges and explores the ideas in more depth. It is an odd, idiosyncratic kind of a film.

Frankenstein freely took what elements it wanted from Shelley’s novel, and that leaves plenty of material behind for Bride to exploit. In particular the film draws extensively on the novel’s middle section, in which the monster – abandoned by its creator – befriends an old blind man, learning to talk and read. Giving the monster the ability to communicate, however primitively, allows for significant character development. While this is nominally a horror film, it ultimately feels more like tragedy. Boris Karloff, armed with this additional capacity and plenty of dramatic material, turns in a far more interesting and nuanced performance. The pure iconography of his debut appearance is watered down, but we get something much more fascinating and thought-provoking instead.

Colin Clive takes a much smaller role here; it is very possible that was due to his real-life alcoholism leading Whale to minimise his participation. In his place the majority of the antagonist role goes to Ernest Thesiger’s prim, mannered Doctor Pretorius. Frankenstein wants to abandon his experiments and retire with his wife Elizabeth (Valerie Hobson filling the role vacated by an ill Mae Clarke). Pretorius forces him back, ultimately relying on taking a hostage to force his hand.

Pretorius seems actively bizarre. He reveals his own successful experiments to create new life: little dancing humans in miniature, each dressed like a king, queen or bishop. After formulating his evil plans in a crypt he sits down to smoke a cigar and drink some wine – still inside a crypt full of bodies. He seems entirely relaxed in the presence of Frankenstein’s monster. This slightly odd, relatively absurd tone is what I like about Bride of Frankenstein the most.

Technically it is wonderful, with evocative camera angles duplicating the long shadows and expressionistic tones of the first film. Franz Waxman’s score is excellent and atmospheric. The make-up on the monster has advanced considerably since his debut, and now incorporates scarring from nearly burning to death at the end of Frankenstein.

The titular bride’s appearance is remarkably brief, and is presented in an unexpectedly tragic fashion. Elsa Lanchester looks striking in the role, with her famous zig-zag hairdo and weird hissing voice. It is no wonder she made such an impression: despite only appearing for all of five minutes she is probably the most immediately recognisable feature of Universal’s monster movies after Frankenstein’s monster himself. Lanchester also gets another role, in a slightly misplaced prologue scene where she plays Mary Shelley introducing the next chapter of the Frankenstein story. She does okay in the scene: her co-stars Douglas Walton and Gavin Gordon (playing Byron and Percy Shelley) are, in a modern context at least, pretty risible.

This is an unexpectedly bold and inventive sequel, that takes creative angles with the material and dares to advance its story beyond a simple follow-up to the enormously popular original. It is no surprise that Bride of Frankenstein is heralded as one of Hollywood’s best-ever sequels: it does everything a good sequel should. It advances the story, brings back the characters, and casts them in a fresh and clever new light.