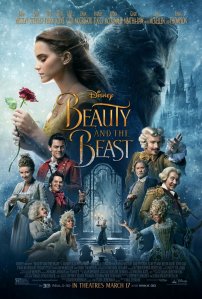 Walt Disney Pictures has developed an immensely lucrative franchise in recent years adapting and recycling its classic animated features into live-action films. Following in the footsteps of Alice in Wonderland, Maleficent, Cinderella and The Jungle Book comes perhaps the most ambitious of them all: a live-action take on Beauty and the Beast, one of the most popular and beloved animated films of all time and the first to ever receive an Academy Award nomination for Best Picture.

Of all the adaptation so far, this seems the one that sticks the closest to its animated inspiration. The classic Alan Menken/Howard Ashman songs remain, as does Menken’s orchestral score – expanded and re-arranged, for course, and the narrative carries few surprises for anybody who has seen the original. There are changes here and there, including some expanded characters and a few plot adjustments, but to a large degree it is all superficial. This is cinema in its most commercially focused form. It would be easy to call it cynical, but as anybody who pays attention knows: Disney is never cynical about making a profit.

There are many elements that work, and work extremely well. Emma Watson is an engaging and hugely appealing lead as Belle, whose character is expanded here to become more of a free thinker and creative inventor. The design and costuming is beautiful, and a pleasant viewing experience all by itself. In the main the various animated household objects that populate the Beast’s castle are well developed and suitable expressive.

Luke Evans is a particular highlight as the egotistical and boorish villain Gaston. He dives into the role with relish, and provides the film with almost all of its funniest moments. Josh Gad is similarly great as his sidekick Le Fou, re-developed here to become Disney’s first openly gay character. It is done well and respectfully, and actually adds a whole new angle to his character. That makes it the best kind of reason to take this step at last: it is not simply a statement of politics or social justice, it’s a move that makes his character stronger.

The castle servants are all voiced by fairly popular and talented actors, including Ian McKellen, Ewan McGregor and Emma Thompson. They work well in the main, although it must be said that McGregor’s attempt at a French accent veers wildly all over the map from France to Scotland and over to Mexico, and Thompson’s cheery working class accent puts a fairly painful dent in her rendition of the film’s title song – Angela Lansbury need not fear of being supplanted in the hearts of viewers as the best Mrs Potts.

Some parts don’t work. The Beast himself feels a little weakly designed, as if director Bill Condon or the producers were afraid of making the character appear too animal-like. Something closer to the grotesque animated version would have fit the film much better. The central and unlikely romance at the film’s core – this is, all things considered, basically Stockholm Syndrome: The Musical – feels even less unbelievable when performed in live-action rather than in animation.

For the target market of enthused children, I doubt that these complaints will hold much water. This is a very pleasant and warm-hearted family fantasy, with some scary bits, plenty of humour, well-presented songs, and a villain you wind up loving to hate. Yes it’s commercial through and through, but the reason Disney is so financially successful at these kinds of films is because as a company they know precisely what a mass audience wants. If you think you are going to enjoy Beauty and the Beast, then you probably will. If you are flinching at the thought of sitting through, I say trust your instincts.