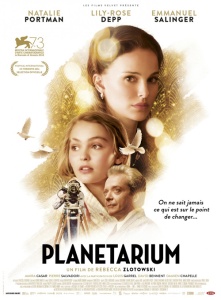 Laura (Natalie Portman) and Kate (Lily-Rose Depp) are sisters performing a seance act in a Parisian nightclub when they are picked up by film producer Andre Korben (Emmanuel Salinger). After experiencing a supernatural presence at a private session Korben grows obsessed with capturing the phenomenon on screen, catapulting Laura towards movie stardom while he undertakes a series of experiments with her sister.

Planetarium, from director Rebecca Zlotowski, is a difficult film. It is difficult to pin down, difficult to properly describe, and from time to time somewhat difficult to follow. It boasts some sensational performances, as well as some striking and provocative scenes and images, but the inventiveness of how the film is presented tends to obscure its actual story. It makes it a film something that frustrates and intrigues in equal measure.

The film throws its audience in the proverbial deep end from its opening moments, and to be honest there are few points where it settles down to a level where the viewer is able to comfortably stop treading water and start to properly engage with what is going on. It seems like this is intentional on Zlotowski’s part: a purposeful trade-off to relax direct storytelling and to spend more time presenting evocative moments of photography, editing, music and performance. There are some odd and unexpected montages; a screen test performed by Laura in particular is particularly arresting.

As the film moves on it becomes progressively unsettling. It is easy to assume at the beginning that Laura and Kate are charlatans. Subsequent events muddy the waters, and as the film goes on it seems swing like a pendulum. The audience is mostly kept guessing as to what is going on. There is also an ominous tone to Korben’s narrative: the film is set in the late 1930s, and as Korben’s Jewish identity shifts into focus events around him take a decidedly anti-semitic tone. The character of Korben seems closely based on real-life producer Bernard Natan: a Jewish immigrant who wound up acquiring the French film studio Pathé, before being arrested for fraud, accused of producing and starring in underground erotic films, and ultimately handed over to the German occupiers by the French government and sent to the Auschwitz concentration camp. He never returned.

Emmanuel Salinger’s performance as Korben is remarkable. There is a gentleness and warmth to his portrayal that softens the character, and avoids any sense that he is acting towards the teenage Kate in any sort of sexual or predatory sense. There is a sort of melancholy about him that is particularly effective. Natalie Portman is also excellent as Laura. Since her award-winning performance in Black Swan Portman has truly taken her skills up to another level. In her hands Laura is a woman with a visible pain in her eyes: without a single line of dialogue we can see she has lived a life that has scarred. Lily-Rose Depp, who did not seem very convincing in The Dancer, is much better here. She has an unearthly quality that adds to the film’s unsettling tone.

In the end, however, Planetarium is only partially successful. While Zlotowski has produced an interesting and visually stimulating film, she has also produced a somewhat muddled one too. The film seems uncertain as to which direction its story should head. There is a film here about the search for proof of the supernatural. There is another film about a sudden brush with stardom damaging the friendship between two sisters. There is yet a third about the insidious rise of anti-Jewish sentiment in 1930s Europe. Zlotowski attempts to undertake all three films at once, and while it is a valiant effort it ultimately makes a bit of a mess.

Planetarium is playing in Australian cinemas from 6 March as part of the Alliance Française French Film Festival. Click here for more information and local session times.