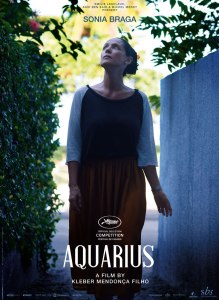 Clara (Sônia Braga) is a retired music critic living in an apartment block in Recife along Brazil’s coast. She has survived cancer and outlived her husband, but now she faces a construction company intent on demolishing her home and rebuilding the Aquarius apartments into larger and more up-market residences. Clara refuses to sell and refuses to budge, leading to an increasingly hostile struggle to force her out.

That is the central plot to Aquarius, the second feature film from writer-director Kleber Mendonça Filho, but it falls a long way short of accurately describing the film. This is a leisurely paced and thoughtful character drama. Its narrative spine may follow Clara’s stubborn refusal to leave her home, but it spins off and expands into themes of nostalgia and memory, regret, family and old age. While the film is arguably over-long, it is also profoundly effective and deeply moving.

To my mind it is also the film of Sônia Braga’s career. For a while she seemed poised for Hollywood stardom: a key role in Kiss of the Spider Woman (1985) here, a performance opposite Robert Redford in The Milagro Beanfield War (1988) there. That mainstream fame never quite eventuated, and she seemed to shift primarily into guest roles in American television. Aquarius sees her back in her country of birth and speaking in Portuguese, and her acting here is jaw-dropping. It is a radiant portrayal, so textured with layers of tenderness and defiance that it does not feel like an actor playing a part at all. Clara feels like a real person; we are simply eaves-dropping on her life. It is testament to Filho’s skills as a writer and director that Braga can develop such a powerful and naturalistic character.

The film is beautiful photographed as well, with each shot thoughtfully and precisely choreographed and framed in an ultra-wide Cinemascope format. There is also a hugely effective use of music: Clara was a music critic, and her apartment walls are lined with shelves of perfectly preserved vinyl records. Accordingly the use of music, whether classical, traditional Brazilian, or English language pop (Queen gets a strong look-in) is smart, evocative and well selected. In one early scene Clara is interviewed by a local magazine, and in doing so presents the most eloquently phrased defence of physical media that I have ever seen. That defence also fits perfectly into Filho’s central theme: how place informs memory. Carla treasures a second-hand vinyl LP because it reminds her of the place and time she purchased it, and of the neatly folded newspaper article that she found inside. Likewise she refuses to vacate her apartment because it is the source of memories from much of her life. She cannot fully preserve the memories if she abandons the objects that inspire them. I think understanding this element of the film gives even more power to its somewhat abrupt conclusion.

This is an intelligent, carefully measured drama boasting multiple layers of story and emotion. It is a tremendous showcase for Sônia Braga’s immense talents. I desperately hope she gets another chance to demonstrate those talents soon.