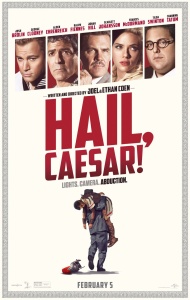 Eddie Mannix (Josh Brolin) is a ‘fixer’ for Capitol Pictures: acting as an intermediary between the studio heads and the various features in production, and spending each day putting out brushfires of scandals, prima donna behaviour and personality conflicts around the backlot. When the studio’s biggest star Baird Whitlock (George Clooney) is kidnapped, it is Eddie who is immediately on the case.

Hail, Caesar! is a 2016 comedy written and directed by Joel and Ethan Coen. It takes an over-the-top satirical stab at the Hollywood studios of the 1950s, with an extended cast of popular contemporary actors playing wildly exaggerated movie stars of a bygone age. One thing you have to say for the Coens no matter your opinion of their films: they are certainly favourites of American screen actors. This film alone features the likes of Brolin, Clooney, Scarlett Johanssen, Jonah Hill, Channing Tatum, Ralph Fiennes and Tilda Swinton. It is the kind of star-powered ensemble that can really get a movie some attention.

One could potentially argue that Hail, Caesar! is a sequel to the Coens’ earlier film Barton Fink: it’s set in the same Hollywood studio a decade later. Comparisons between the two, however, do not favour the more recent film. Narratively speaking – and in comparison to Fink – the film is an absolute mess, with characters and subplots wrapped around one another like a discarded plate of spaghetti. Certainly many of the elements are amusing, but they do not add up to anything. There is such a scattershot approach to storytelling here that it is difficult to enjoy the film as a whole. Indeed the two stand-out sequences – an aquatic ballet featuring Johanssen and a toe-tapping musical number featuring Tatum – do not actually add anything to the story at all.

And here’s the thing: without a cohesive and well-assembled film to enjoy, it falls down to enjoying each of the film’s odd little set pieces and plot threads. Each actor is clearly having a ball, and it’s difficult for that enjoyment not to become infectious. There is plenty of satire here, but it is about a soft and loving for old-school Hollywood as a film-making satire can get. Whether it is George Clooney playing a gullible idiot in a room full of communist screenwriters, or Ralph Fiennes playing a harried director saddled with a terrible actor, or even extended cameos by the stars of Highlander, the film provides a constant stream of amusements to keep its audence entertained. It’s a bad film, but it’s made up of great scenes.

The highlight of the entire film is Alden Ehrenreich, playing a young star of cheap studio westerns. When the studio decides to re-format his image he is thrust from riding a horse to seducing debutantes on a chaise-lounge. He is set up on dates with another contracted studio player. He plays the part with a hilarious naivete but also a hugely charming nobility. While Ehrenreich has been performing in American films for almost a decade, it’s clear that this is the role that has launched him into the big leagues: his next major role is as a young Han Solo in Disney’s forthcoming Star Wars spin-off.

I tend to go hold and cold on the Coen brothers. I have never doubted their immense talents, but for every one of their films that impresses me enormously – Miller’s Crossing, O Brother Where Art Thou? – there is another that simply fails to engage. Hail, Caesar! is somewhere in the middle. Muddled, messy, silly, but regularly an immense delight as well.