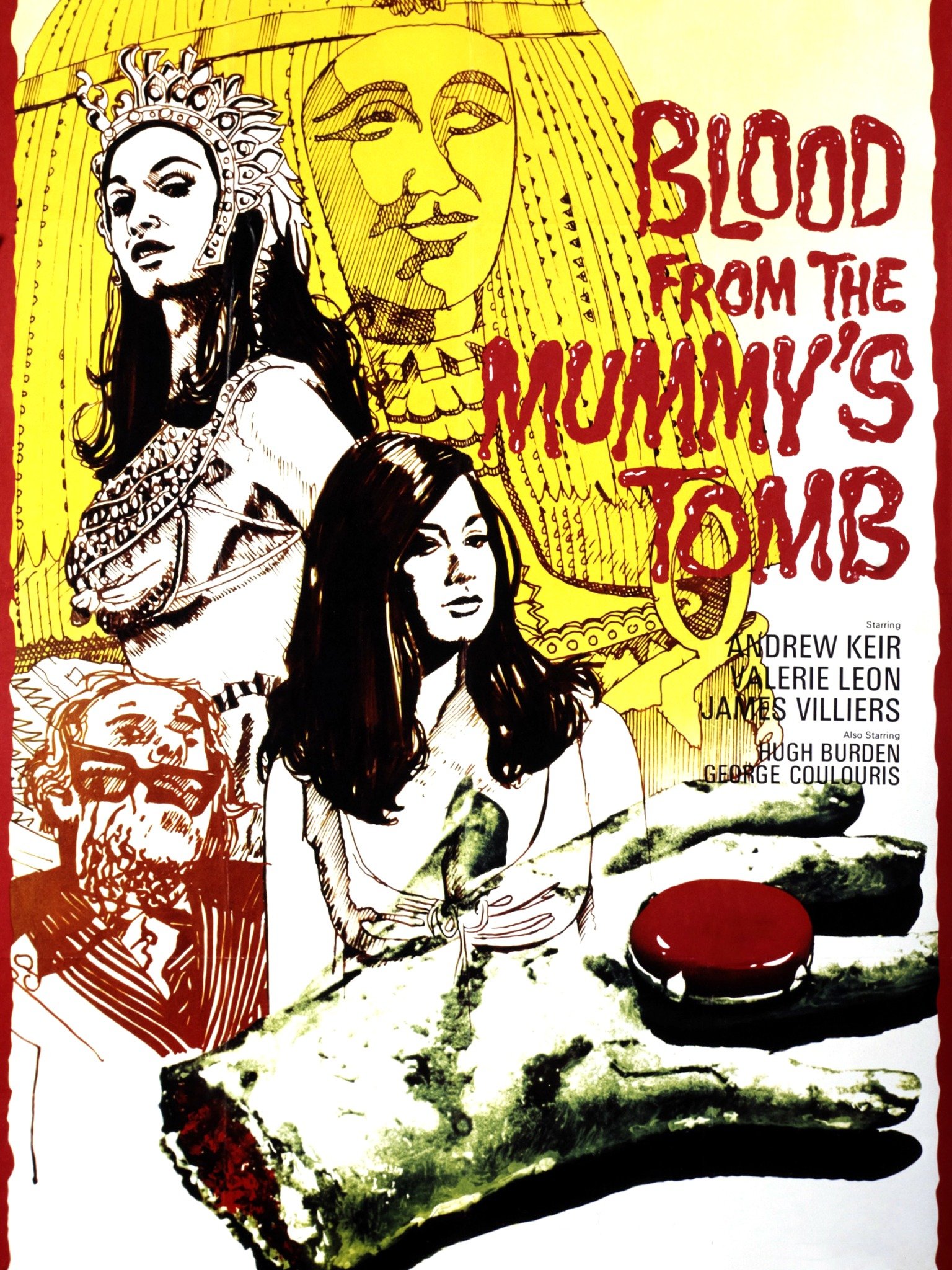 Hammer Film Productions represent a legendary part of British film history. While the company was established in 1935, it was a period from 1955 through to the early 1970s that cemented their contribution. Beginning with a series of horror adaptations including Dracula and Frankenstein, and benefiting from a string of distribution deals with American studios, Hammer redefined screen horror for a generation and made iconic stars out of Christopher Lee and Peter Cushing.

By the 1970s, however, horror films in America had evolved to the point where Hammer’s main selling point – garishly bloody violence – was no longer in advance of its competitors. An attempt to boost their films’ popularity with more sexual content and comedy failed, and the company went into liquidation in 1979.

Blood from the Mummy’s Tomb, released in 1971, is a Hammer production from this end stage. The company had made horror films based on mummies before, but this time their film did not technically include a mummy at all. Instead the archaeologist Professor Fuchs (Andrew Keir) brings back a sarcophagus from Egypt that contains the perfectly preserved body of a powerful – and, of course, sexually attractive, sorceress queen. For reasons revealed during the film, this long-dead queen looks exactly like Fuchs’ own daughter Margaret (Valerie Leon).

Before judging Blood from the Mummy’s Tomb it is necessary to know that its director Seth Holt died on-set during production, and the resulting film was completed by his colleague Michael Carreras. For his own part, Carreras has openly admitted that footage and scenes that should have been shot were never completed; quite frankly it is a miracle that a completed feature was assembled at all. In the face of these events, harshly criticising the film for being rather woolly and more than a little incoherent at times seems brutally unfair – yet here we are. Mummy’s Tomb is not capturing the Hammer studio at its best.

It seems rather a shame, as Valerie Leon delivers a very watchable and engaging performance. She is not always best served by the screenplay, however, or a perplexing choice to over-dub her voice with someone else’s (a making-of documentary shows off Leon’s real voice, which seems fine). More unfairly treated by the script is Andrew Keir as her elderly and mostly unconscious father; Keir was an admirable talent – including in other Hammer productions – and there is a sense the role was cut back during production (Holt’s first choice, Peter Cushing, quit the film one day into the shoot when his wife was diagnosed with emphysema).

The supporting cast fare somewhat better. James Villiers is a wonderfully camp and aristocratic villain as the rival archaeologist Corbeck, while Mark Edwards cuts a solid figure as love interest Tod Browning (whose name is a small in-joke for the horror fans). Cult actor watchers will, as is often the case with Hammer, have a field day, with appearances by Hugh Burden (Channing in Doctor Who‘s “Spearhead from Space”), former Orson Welles collaborator George Coulouris, A Clockwork Orange‘s Aubrey Morris, and future Blake’s 7 cast member David Jackson.

Blood from the Mummy’s Tomb is serviceable pulp horror, which more than a little like damning with faint praise, but it does provide that combination of blood, violence, hammy acting, and low-level nudity that fans of Hammer  tend to expect. Tragic circumstance crippled its chances to a degree, but nonetheless it manages to entertain rather well and will still please its target audience.