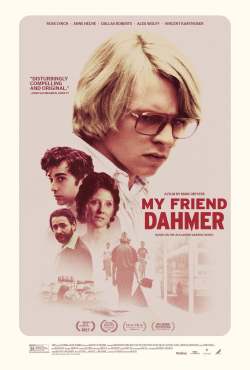 Jeffrey Dahmer was an American serial killer who, between 1978 and his arrest in 1991, raped, murdered and dismembered at least seventeen young men. He is now the protagonist of a dramatic feature film, My Friend Dahmer, directed by Marc Meyers and based on the graphic novel by John Backderf. It is a challenging film in one key respect, but one that I suspect may lead some to find it a particularly difficult watch: it aims to make us feel sorry for a serial killer.

There is an almost knee-jerk reaction to that, and it’s one that I occasionally felt when watching Meyers’ film. It almost feels like a trick, one that uses well-worn dramatic techniques and familiar scenes to deliberately make us sympathetic to the struggles of an isolated, teased and misunderstood American teenager, right up to the moment when he starts murdering innocent people. In those moments there is an internal flinch backwards, and a momentary desire to blame Meyers and Backderf for making you care about what some homicidal lunatic felt or experienced. Here’s the thing: Meyers and Backderf may be right.

Backderf for one should know better than others: he went to high school with Dahmer, and the odd friendship they shared forms the core of the film. To a large extent My Friend Dahmer tracks a highly typical high school narrative, one based around friendship, rebellion, sex and drugs, and more than a few gloriously anarchic pranks against school authority figures. Then there is the other side, the one that creeps in from underneath. The obsession with dissecting dead animals, or slowly melting them inside jars of acid. The growing recognition of a closeted homosexual living without support. The disintegrating family situation. The family history of mental illness. Jeffrey Dahmer (Ross Lynch) walks through school like a screaming cacophony of warning signs that something is going terribly, terrifyingly wrong, and time and again no one appears to notice.

His father Lionel (Dallas Roberts), to his credit, senses something is wrong with Jeffrey, but lacks the emotional maturity to articulate a supportive response. Of his self-proclaimed ‘fan club’ at school, which includes Backderf (Alex Wolff), only one of them recognises that what they think is funny encouragement of Dahmer’s public antics is actually a blind cruelty in place of genuine friendship. Even Dahmer himself appears to recognise something is going terribly wrong inside his mind yet like his father cannot formulate a functional cry for help.

There are essentially two points of view one can form about serial killers: that they are in some innate fashion evil, or that they are to a devastating degree suffering from mental illness. My Friend Dahmer absolutely takes that second approach, to powerful effect. It does not show its audience a single murder, and that is enormously to its credit. It is a story about a road to horror, and not the horrors itself, and it showcases every stop-sign along that road that Dahmer, his friends, his family and his teachers blindly drive through.

Technically the film is relatively mundane, without any significant stylistic flourishes or innovations. Likewise the screenplay, by Meyers, generally plays out in a very traditional and familiar pattern of numerous American high school dramas. As Dahmer, Ross Lynch is tremendous. He inhabits the character, performing with all of the awkward tics and idiosyncrasies described in Backderf’s graphic novel. It is an impressive transformation for Lynch, who remains best known as the wholesome blonde moppet Brady in Disney’s Teen Beach Movie franchise. After this, I suspect the kinds of offers he receives will change considerably. Anne Heche is also very strong – and likewise almost unrecognisable – as Dahmer’s emotionally unstable and erratic mother.

This is a hugely worthwhile film that raises a lot of questions by the time it ends. It feels inevitable: we watch, desperately wishing someone could notice the tell-tale signs before it is too late, but knowing from history that no one will. Out there in suburban America another teenager is probably showing the same signs now – will people notice them? The genius of My Friend Dahmer is showing such a familiar middle-class set-up, with such familiar characters and situations. In the young Jeffrey Dahmer we can probably all recognise people with whom we went to high school. Meyers successfully makes us care about him, worry on his behalf, and hope he can somehow find help. It’s a frightening film, but more than that it’s a drama. More than that it’s a tragedy.