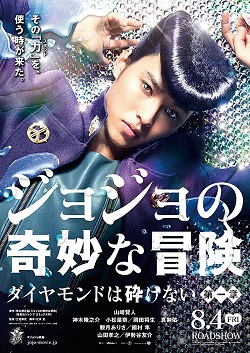 Teenager Koichi Hirose (Ryunosuke Kamiki) is the new kid in town, starting at a new high school and eager to make friends. He finds Josuke Higashikata (Kento Yamazaki), a surly teen rebel with the world’s biggest pompadour haircut and the ability use a supernatural power known as a “Stand”. Before long Josuke, nicknamed “JoJo”, is up to his neck investigating a local serial killer as well as a mysterious young man who seems to be shooting people with a magical bow and arrow to give them Stands of their own.

There is nothing so overly confident as a film with “Chapter 1” in its title. To get everybody up to speed: JoJo’s Bizarre Adventure is a long-running manga series by writer/artist Hirohiko Araki that has published 121 volumes and counting. It has been adapted extensively into animation and videogames. This is its first live-action film adaptation. It is directed by Takashi Miike, one of Japan’s busiest and most prolific directors, whose back catalogue is a one-of-a-kind jumble of lavish samurai dramas, anime and manga adaptations, cult horror flicks and children’s films. Like JoJo, Miike is remarkably prolific. JoJo’s Bizarre Adventure is his 101st film as director.

I have never read the original manga nor seen any of its anime adaptations. I came to JoJo’s Bizarre Adventure completely cold, with no foreknowledge of its setting, characters or tone. It is important to make that clear from the outset, as I strongly suspect pre-existing fans of the manga will have a very different experience to the general viewer. To an extent the film pre-supposes that its audience knows who JoJo is, and what a Stand is, and why everybody has such ridiculous hair (honest to God it’s a highlight). While the film only adapts one key arc from the original work, that is still several volumes of comic book that must be squeezed into a two-hour feature. It is a little confusing from the outset and adopts a slightly woolly narrative as it goes: the film begins focused very directly on Koichi, but as soon as he meets JoJo he is rather bluntly sidelined for much of the remaining film. That is possibly for the best, since JoJo is a more interesting character.

Even once the story gets going the narrative fails to become clear. A lot of time is spent on feels like a subplot – tracking down a serial killer – before the climax stretches out interminably, throwing in more and more unexplained and somewhat silly elements as it goes. It does not even end properly, with the inevitable shadow of a Chapter 2 hanging over the last 20 minutes or so. (It has been three years, and said sequel has not eventuated.)

There are a lot of nice moments. The film is regularly funny, and wonderfully over-the-top, but it also regularly drags to a crawl. The production design is split down the middle between elements that work and those than really challenge the viewer’s suspension of disbelief. At almost exactly two hours in length it also feels a solid 10-20 minutes too long, despite the amount of busywork thrown into the story.

Takashi Miike works at an incredible rate, and while that does offer his fans plenty of films to watch it also has a tendency for half of his films to feel undercooked and weak. Sadly JoJo is one of those weaker films. It is not as bad as his earlier manga adaptation Terra Formars, but compared to other recent films like The Mole Song and its sequel, and the masterful Blade of the Immortal, it is definitely a second-string outing. JoJo-philes will likely be in Stand heaven. The broader audience has better things to see.