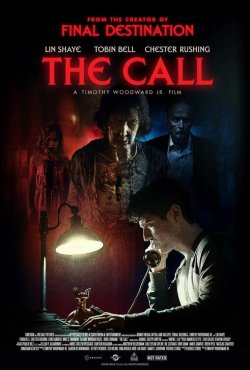 Stunt casting has likely boosted Timothy Woodward Jr’s The Call to a profile beyond its own merits, but it remains a watchable and broadly enjoyable independent horror film. Measured expectations are a must.

A group of friends have engaged in the long-term harassment of elderly Edith Cranston (Lin Shaye) – who they believe is a witch. When she takes her own life, her grieving husband (Tobin Bell) invites all four friends to their house. She has left each friend $100,000 in her will – on the condition that they each last 60 seconds on a call to a mobile telephone buried in Edith’s coffin.

The Call is based on a sensational premise, but wobbles in the execution. The film is set in the 1980s, seemingly for no better reason than the capitalise on the current post-Stranger Things trend for such period settings. It allows for a retro-styled synth musical score, and also seems to justify some of the screenplay’s less believable plot developments. As horror fans we tend to celebrate the films from the 1980s with perhaps a little too much nostalgia and forgiveness, never properly acknowledging how poorly some of those beloved films were written. Stranger Things touches the iconography and tone, but its writing is aggressively contemporary. The Call brings the slack writing of the period along with the aesthetic. The idea of a group of high schoolers violently harrasing an old woman for witchcraft (of all things) seems lazy. That they would voluntarily accept an invitation to her house after tormenting her to the point of suicide simply beggars belief. It is a significant problem, since such unconvincing behaviour establishes the premise of the film.

It is difficult to fairly judge the key cast – Chester Rushing, Erin Sanders, Mike C. Manning, and Sloane Morgan Siegel – because for the most part they are not given anything particularly great with which to work. As it stands, Rushing is the stand-out. Where the film does suddenly leap up by degrees is when they arrive at the late Edith Cranston’s house. As her grieving husband, Tobin Bell dominates the film in every scene in which he appears. In a lengthy monologue he adds tension and gravitas. His calculated delivery, boosted by one of the best performing voices in Hollywood, is absolutely The Call‘s greatest asset. Credit to writer Patrick Stibbs for managing to get Bell through the scene – in which he carefully explains the rules of the game – without ever asking the teenagers if they ‘want to play a game’.

Despite a lengthy screen career Bell is, of course, best known as serial killer John Cramer – aka ‘the Jigsaw Killer’ – in Lionsgate’s long-running Saw franchise. He is paired with Lin Shaye, similarly a screen veteran and similarly the star of a long-running horror series (in Shaye’s case, the Insidious films). Their casting here is a stunt, designed to attract fans of both franchises to watch this unrelated movie. In a typical horror film this kind of winking appearance tends to grate. In the case of The Call their performances actually come close to redeeming the entire movie.

The film’s second half is vastly superior to the first, as the four protagonist heads upstairs in turn to answer the telephone. Woodward Jr has much more material with which to work, and exercise some properly decent visual direction – albeit rather derivative of Wes Craven’s A Nightmare on Elm Street. With a tidier and less predictable set-up The Call may have actually wound up as something genuinely good. Instead it is merely watchable: a curate’s egg that, while entertaining in fits and starts, never comes together as a whole.