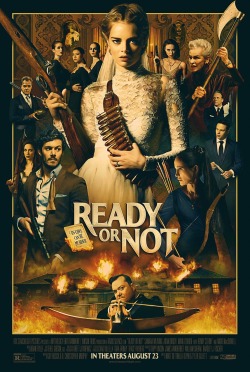 While not a necessary element of horror cinema, social commentary is such a solid match for the genre that the better films usually find room for it somewhere. Ready or Not, a campy exercise in which a bride is hunted for sport by her new in-laws, certainly digs hard into the idea. While ‘the rich prosper at the expense of the poor’ is essentially low-hanging fruit – I suspect most of us know most wealthy people are monsters – it is always a crowd-pleasing background for some violent, bloody satire.

Grace (Samara Weaving) is overjoyed to marry her new husband Alex (Mark O’Brien), but feels nervous about fitting into his enormously rich family – owners of a century-old board gaming empire. When family tradition demands she plays a randomly chosen game on her wedding, Grace is keen to fit in. When it turns out to be hide and seek – and her new family come armed with shotguns and crossbows – Grace is forced to run for her life.

An ill-advised prologue does mishandle the set-up in many ways, but once the story proper finds its feet this is an entertaining back-and-forth blend of horror and comedy. In all honesty it is much stronger when aiming for bleak, inappropriate laughs (a running joke involving coked-up sister-in-law Emilie (Melanie Scrofano) is superb), but even the more tense scenes carry a bold, archetypal entertainment value. The film’s antecedents are numerous, including the likes of Saw, The Purge, You’re Next, and The People Under the Stairs, but directors Matt Bettinelli-Olpin and Tyler Gillett embrace their roots and deliver an openly-declared pastiche. It is, all in all, enormous fun.

The material has been lifted to an extent by a solidly talented cast. Samara Weaving (Bill & Ted Face the Music) demonstrates some impressive star power, with a good comic delivery and a strong screen presence. Hunting her down is genuinely impressive talent including Henry Czerny (Mission: Impossible) and Andie MacDowell (Groundhog Day, et al), each of whom digs hard into their characters’ comedic value. The whole films leans into its own absurdity, which seems a winning strategy. There is even a nicely ambiguous back story that leaves the viewer guessing over whether not there is a supernatural element at play; the film actively juggles the possibility right the way through to its final moments.

Yes there is violence and some bloody moments, but altogether the gore is fairly well off-set by the humour. In that regard it is a more palatable and mainstream experience than a lot of horror cinema over the past two decades, and a touch more likely to secure a legion of happy fans. It was released theatrically in 2019 by Fox Searchlight – hardly the most genre-savvy of distributors – and while profitable in cinemas still feels a little under-exposed. It lies on home video and streaming (Disney+ in Australia) for fresh audiences to tap into its charms.