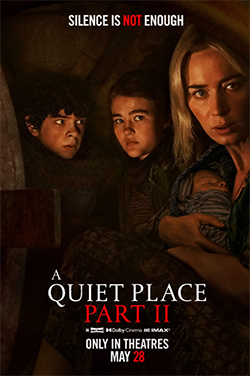 John Krasinski’s exceptional horror film A Quiet Place (2018) finally gets its well-deserved sequel in this beautifully effective follow-up. Extending the original’s storyline in a smooth and efficient manner, it also does an admirable job of adding depth and character development to the first film’s survivors. If there is one outcome mostly likely from this second effort, it is that Part III must surely be on the horizon.

After Lee Abbott (John Krasinski) dies saving his family, Evelyn (Emily Blunt) her children Regan (Millicent Simmonds) and Marcus (Noah Jupe), and her newborn baby move on to find fresh shelter from the sound-sensitive creatures that have flooded the country. They soon meet fellow survivor Emmett (Cillian Murphy) – but he does not seem as happy to see them as they are him.

To a large extent, the quality of Part II simply matches the quality of the original film. After a prologue sequence set prior to the first Quiet Place, events pick up pretty much immediately where they had been left off: a father dead, but his family now armed with a means of disorientating and killing the savage alien invaders that have been hunting them down. It is a textbook sequel, in that it brings the audience all of the aspects that made the original successful and simply advances or twists those elements to provide new material. While there has been a change of cinematographer and writing team (Krasinski working on his own this time around), the sound designers remain the same – and the film closely follows the visual and auditory rules that the first film set up. It is very much an ‘if it ain’t broke, don’t fix it’ approach that might disappoint viewers seeking a genuine advance or change, but which guarantees satisfaction for the bulk of the audience – myself included.

Krasinski’s screenplay does a solid job of taking the less obvious story route at key moments. People that might seem untrustworthy subvert expectations, and incidents that feel like they are going to dominate the plot end in unexpected directions. The tendency to cut out of action and thrill sequences quickly remains, and ensures both ongoing suspense and an enjoyable pace. At 97 minutes in total, Part II is a strong case for shorter feature films. It is worth admiring how much the film packs into that hour-and-a-half as well. The world is expanded and developed, background detail is filled in, and characters receive a better focus than they received the first time around.

While Cillian Murphy is a strong addition to the cast, this is ultimately Millicent Simmonds’ movie. Regan is given the lion’s share of action and story, and the film continues to make excellent use of both actor and character’s deafness in telling the story. Without her father to guide and protect her, Regan is forced to mature significantly; this is as much a story about transitioning into adulthood as it is a suspenseful horror movie. Simmonds is absolutely up to the task as well, delivering some strong and deeply effective acting in the role. I felt she was the first film’s most valuable asset, and that has clearly been recognised here. By contrast, Emily Blunt feels slightly under-used as Evelyn. This is very much a film focused on the younger generation.

This is a hugely entertaining slice of suspense-based horror, and does exactly what you want a good sequel to do. Fans of the first Quiet Place will not need encouragement to check it out. Anyone new to the series will want to check out both.

A Quiet Place Part II officially opens in Australian cinemas this Thursday, 27 May 2021.