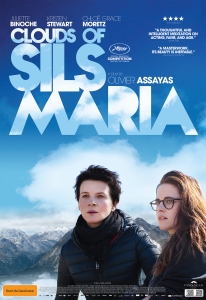 A note that this reviews spoils a little more of the film’s plot than I usually would. Short version of this review is that it is a profoundly excellent film and you should see it.

Maria Enders (Juliette Binoche) is an internationally acclaimed actress of stage and screen. While on her way to accept an award of behalf of her one-time mentor and director Wilhelm Melchior she learns that Melchior has just died. Enders first became famous playing one of the lead roles in Melchior’s famous play Maloja Snake, in which a manipulative young woman named Sigrid seduces her older, more fragile boss Helena. Now she has been offered the opportunity to perform in a remount of the play, this time playing Helena – and with a popular young Hollywood actress named Jo-Ann Ellis (Chloe Grace Moretz) playing Sigrid.

It is actually quite difficult to come up with a satisfactory synopsis of Clouds of Sils Maria, since while the storyline is relatively simple its treatment is complex, ambiguous and multi-faceted. It is a 2014 drama from French filmmaker Olivier Assayas, of whom I have been a fan ever since his excellently weird Irma Vep all the way back in 1996. I have recently reviewed his first two features Disorder and Winter’s Child, and am now jumping ahead to one of his more recent – and certainly most acclaimed – features.

The film deliberately takes its time in setting things up, beginning on a train to Switzerland as Maria works on her acceptance speech for Wilhelm’s award. Outside of her cabin her personal assistant Valentine (Kristen Stewart) works two phones at the same time to organise her professional and social life. It is a long scene but runs at a rattling pace. For Valentine there is seemingly no pause or rest, simply an unending stream of calls from people offering roles, setting up fashion and award events, seeking interviews, and planning photography sessions. The whole first act of the film continues in this vein. Even after Maria learns that her beloved Wilhelm has died she has to immediately put on a gown for an exclusive fashion shoot. Two things occurred while watching this fascinating opening sequence. First: that being an international celebrity is probably not as fun a job as one imagines it to be. Second: that Kristen Stewart really has sneaked up and become one of the finest American actors of recent years. More recent performances – particularly in Assayas’ subsequent film Personal Shopper – have only cemented this opinion.

For a while there it was really hard to tell. Whether it was her starring in the notorious Twilight movies or her weirdly sullen and disinterested performance in Snow White and the Huntsman, she seemed to be an actor without real drive or enthusiasm for challenging roles. I had even taken to gently mocking her for her weird penchant in those big Hollywood movies to regularly stare into the middle distance, her jaw slightly slack and open. There is none of that here: in her hands Valentine is a profoundly three-dimensional and vulnerable woman. Stewart creates an sense of multiple depths to the character that do not even get addressed in Assayas’ screenplay. She seems conflicted at times, and there is clearly thought behind everything she says and does – and indeed those moments where she chooses not to do things.

Binoche is wonderfully contradictory in the opposite role, managing to be both arrogant and brittle at the same time; strong, and yet simultaneously deeply vulnerable. She may be a hugely successful and popular actor, but she is in middle age now and Hollywood at least has grown obsessed with the hot new things decades younger than her. It is what makes re-performing Maloja Snake such a worry for her. When she was young and aggressive and seductive, she played the young, aggressive and seductive part. Now she is being asked to play a woman who is older, more insecure and all too close to a fall, and Maria is forced to ask herself whether she is to play Helena or if she is Helena.

The film’s middle section sees Maria and Valentine move into the late Wilhelm’s cabin in the Alps to run lines and do pre-rehearsal work for the play. It is here that the film’s most interesting parts take place. They disagree. They begin to get on one another’s nerves. At other times they seem to bond even more closely. When tempers fray the most it becomes impossible to tell when a play reading has ended and an actual argument has begun – fiction and reality simply blur together in such a way that there does not seem a significant difference any more. They also have a lot of discussion over the changing state of cinema and acting within it: their ideas of good acting and good cinema seem worlds apart – once again Maria is increasingly separated from her industry by age.

In one stunning piece of writing events off-screen affect Valentine in a profound, partly hidden fashion. Her character departs the film in a deliberately open-ended fashion. Not only does Assayas not give us the answer to what she has done and why, he barely provides enough clues to allow an informed guess. There is simply emotion and uncertainty. It is masterfully handled, and Stewart’s performance is so striking that even in her absence her character continues to have an effect on the remainder of the film.

The film is beautifully shot, making full and worthy use of the beautiful Swiss landscape. The use of classical music for the film’s score is perhaps a little bit of a let-down, but does its job sufficiently to not pose any real problem. Chloe Grace Moretz is wonderful in her comparatively brief role as ‘flavour-of-the-moment’ Jo-Ann Ellis. As with Maria and Valentine, it is a character with contradictions and depth.

Olivier Assayas has created a marvellous film here. It is immensely captivating, rich in well-realised characters, and presented in a brilliantly unsettling manner. There’s an edge of the film that makes it feel rather tragic. Something is lost between the beginning and the end, and we’re left with Maria onstage seemingly in her prime, but secretly broken to pieces. This film floored me.