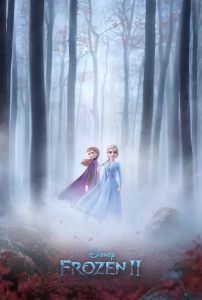 Following the events of Frozen, the kingdom of Arendelle lives in a state of peace under Queen Elsa (Idina Menzell) – but when Elsa starts hearing a singing voice calling to her from far away, she is compelled to follow it. Along with her sister Anna (Kristen Bell), friend Cristoff (Jonathan Groff), reindeer Sven, and animated snowman Olaf (Josh Gad), she enters a magical forest that contains the secret history of Arendelle and the source of her magical powers.

The Walt Disney Animation Studios have, over the past 80 years or so, shied away from producing sequels. Their first was 1990’s weakly received The Rescuers Down Under, and then almost a decade later the studio produced 1999’s Fantasia 2000. Other than a brief dalliance with cheaply animated direct-to-video spin-offs in the early 2000s, that was it – until Disney elected to hit audiences with the one-two punch of Ralph Breaks the Internet in 2018 and Frozen II last year. As a lifelong fan of Disney’s animated works, it is a trend I was hoping not to see again; one of the strengths of the studio used to be its regular production of original works and one-off adaptations of classical literature. With Ralph Breaks the Internet revealing itself as a crushing disappointment, I personally had low expectations for Frozen II.

In the end, those expectations are both met and are also vastly exceeded. Directors Jennifer Lee and Chris Buck oversee a visually marvellous work, with stunning imagery and design giving their new film a scope and scale that towers over the more intimate original. The popular characters from Frozen return with the same talented cast, and given a screenplay with a great combination of funny dialogue and deeply personal dramatic beats. Each character is given moments to shine and excel, and new additions – while never particularly given a strong focus themselves – work in supporting and entertaining ways.

On the other hand, there is nothing in Frozen II that feels necessary: the film itself clearly exists as an almost wholly commercial exercise, which in some ways feels a redundant thing to say about a Walt Disney feature but yet does stand between the film’s artistic aspirations and the audience. Along with its redundancy comes an inevitable cynicism. Frozen II entertains well enough, and some of its elements are wonderfully inventive, but at no point does it feel like a story that was begging to be told. An original proposition, such as 2020’s upcoming Raya and the Last Dragon, seem a far more exciting film to see.

Frozen II is very good. It combines action, comedy, romance, and drama, and blends them wonderfully with beautiful CGI animation. It offers audiences a chance to re-connect with much-loved characters, and get all-new ear-worm songs stuck in their head. For parents tiring of constant replays of Frozen it offers a valuable respite. It always remains in the mind, however, that nobody needs a second instalment. Frozen II is great, but it is only ever going to be reheated excellence. Sequels are simply beneath this studio; they represent talent going to waste.