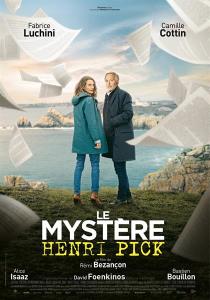 An editor for a French publishing company uncovers an abandoned and unpublished manuscript by small-town pizza chef Henri Pick – now dead for two years. When the published book becomes a literary sensation, all of France is enamoured with the discovery of a new literary genius – all except for prickly literary critic and TV host Jean-Michel Rouche (Fabrice Luchini). When he loses both his job and his marriage in one night due to the novel, he sets out to solve the mystery of who Henri Pick was and who really wrote his acclaimed book.

The Mystery of Henri Pick, which is coming to Australia a little late after its 2018 French release, is an entertaining and regularly funny mystery adventure. Jean-Michel knows in his heart that there is no way a Breton pizza chef – one with no history or reputation for reading books, let alone writing them – could possibly be the author. What, then, is the true identity of France’s latest literary star? Jean-Michel’s ad-hoc investigation forms the spine of what is essentially a traditional murder-mystery – only with less killing and more writing; not a ‘whodunnit’ so much as a ‘whowroteit’.

Fabrice Luchini was a delight in last year’s A Man in a Hurry, and he plays a similarly irascible and widely disliked man again here. Jean-Michel is not quite as forcefully aggressive as that film’s role, but he a constant and overly smug presence to much of the Parisian literary scene. He is always certain of his own intellect, and regularly refuses to show the most elementary of niceties, and once his personal life and career get flattened by Henri Pick‘s runaway success he has little else to do but obsessively pursue a string of clues, evidence, and red herrings from Paris to Brittany and back. The genius of Luchini’s performance is that he makes such an insufferable man into such an entertaining protagonist.

Camille Cottin makes for an excellent Dr Watson to Luchini’s Holmes, playing Joséphine Pick – daughter of the widely assumed author whose distaste for Jean-Michel’s constant attempt to sully her family name gradually give way to a desire to find out the truth for herself. They make for a hugely entertaining double-act, one peppered with a little bit of flirting but nothing so outspoken as to override the central mystery narrative. The two actors bounce off one another well, including a joke about Margueritte Duras that stands as one of the best overly intellectual gags I have heard in a film for some time.

In keeping with the mystery genre, the film comes packed with a range of suspects. Who is the real author of Pick’s novel? His daughter? His widow? The publishing editor that stumbled upon his manuscript? Her boyfriend, an aspiring author himself? The original librarian at the place where the manuscript was found? The list of suspects keeps getting longer as the film progresses, each shortly accompanied by a reason why they cannot be the writer than Jean-Michel seeks.

The Mystery of Henri Pick is a slick, commercial work, and lacks the arthouse pretensions so often seen in festival films. Director Rémi Bezançon keeps everything upbeat, well-paced, and shoots the film in a straight-forward and unfussy manner. It is a warm, light-hearted caper: blessed with a strong cast, a script sparkling with wit, and a literary sense that makes it bounce along like an Agatha Christie-styled thriller. It is strongly recommended.

The Mystery of Henri Pick is screening across Australia as part of this year’s Alliance Française French Film Festival from 10 March. Check the website for your local schedule. It is also receiving a general release in Australia some time in April – check your local independent cinema for details close to the date.