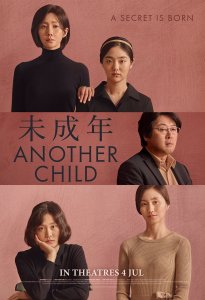 Joo-ri (Kim Hye-jun) and Yoon-ah (Park Se-jin) are high school classmates who hate one another. Their acrimony only increases when Joo-ri’s father and Yoon-ah’s mother have an affair, resulting in Yoon-ah’s mother Mi-hee (Kim So-jin) falling pregnant. While Mi-hee seems unable of treating her pregnancy seriously, Joo-ri’s father Dae-won (Kim Yoon-seok) suffers a crisis of shame and embarrassment, and her mother Young-joo (Yum Jung-ah) must decide whether to remain with her unfaithful husband or leave.

That is a lot of character dilemmas to work through, and did not even include Joo-ri and Yoon-ah’s problem of hating one another while simultaneously being drawn into spending most of their time together. On paper, Another Child reads like a terribly melodramatic soap opera. In practice it is a smart, inventive, and powerfully effective character drama.

South Korean cinema has been on an absolute roll in recent years. It is not simply the large-scale action and historical war films that have been gaining global attention; they have always been a relatively high-profile aspect of the industry. It is the smaller films that have really been making the world take notice: highlighted this year by the phenomenally successfully Parasite (directed by Bong Joon-ho) and now this marvellous chamber piece from popular actor and first-time director Kim Yoon-seok. It is an intimate and powerful piece, laced with a natural sense of humour and charm. In all honesty, if you are not watching any South Korean movies you are missing some of the very best cinema the world has to offer.

Kim has always demonstrated a strong gift for acting, in such films as 1987: When the Day Comes, The Yellow Sea, and The Chaser, but with his first directing assignment (for which he also co-writes with Lee Bo-ram) he shows off an entire new range of talent. The film takes a deeply awkward situation, spreads its effect more or less evenly across five characters, and then bounces those characters against one another like a dramatic pinball machine. In the screenplay, he and Lee do a remarkable job of throwing in somewhat unlikely plot developments, but then somehow make it all seem entirely believable and natural. It is a gripping storyline in which no one really is without fault. When Mi-hee gives birth prematurely, it shifts the entire situation into a stressful high gear – the baby is sickly and at a serious risk of dying in hospital, Joo-ri and Yoon-ah’s rivalry must suddenly face the fact they both share a brother, Dae-won is split between two families, and Young-joo’s choice on how to go forwards suddenly gets an additional and confronting complication.

It is worth dwelling on Young-joo. Yum Jung-ah’s performance is absolutely the strongest of the five leads – although the other four are all excellent – and the screenplay affords her a high level of nuance and complexity. She spends the film fighting with her husband, struggling with her daughter, and having to face another woman who has both shattered Young-joo’s life but also clearly needs help and support. The most interesting relationship she gains is with Yoon-ah: they have the least to do with one another, which may explain why it is so easy for them to form an odd emotional connections. This movie is an absolute godsend for the cast: everybody is given moments to shine, complex relationships to develop, and strong dialogue to recite. It is no surprise it has an actor as writer/director: this is very much a movie for actors.

Hwang Ki-seok’s cinematography is unobtrusive but creative, while Kim Sun-min’s editing keeps everything running at a strong yet gentle pace. For a directorial debut this is a remarkably accomplished drama with a real sense of being guided by an experienced hand. 2019 is shaping up to be a banner year for South Korean film. Fans of cinema owe it to themselves to experience every Korean film that they can find.

Another Child is screening around Australia at the Korean Film Festival in Australia (KOFFIA). Click here for more information.