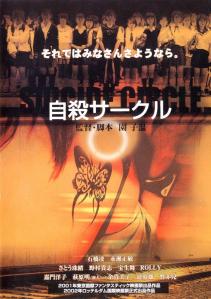 One evening more than 50 teenage girls line a Tokyo subway platform, wait for an express arrival, and jump together to their deaths. As further suicides ensue across Japan, a trio of police detectives work around the clock to track down the mysterious ‘suicide club’ that appears to be controlling them.

Sion Sono is one of Japan’s most prolific and internationally successful directors, known widely for both the inventiveness and variety of his feature films and the sheer rapidity with which he directs them. Since his feature debut in 1986 (A Man’s Flower Road) he has helmed at least 45 films. In 2015 alone he directed five separate pictures. Suicide Club (titled Suicide Circle in Japan) dates back to 2001, and was Sono’s first major commercial success. From the film’s outset there is a clear influence hanging over the film of what became popularly described as “j-horror”, a renewed movement of Japanese horror films including the likes of Cure, Ring, Pulse, and Ju-On: The Grudge. The films shared a similar moody tone and reliance on traditional folk horror; while Suicide Club begins in this vein, it soon shifts unexpectedly into different territory.

There is a strange mixture of elements to Suicide Club, including police procedural, body horror (someone is sending the police rolled-up scrolls of human skin), pop idol groups, the supernatural, and technological thriller. By the time Sono inserts a last-minute sadistic glam rock villain (played by real-life pop musician Rolly), the film has descended into a red-hot mess: too many elements of which to keep track, and insufficient context to allow them to make sense. It is hugely entertaining stuff when taken on a moment-to-moment basis, but largely fails to hold together as a cohesive piece.

Mitsuko (Saya Hagiwara) is the closest thing the film has to a protagonist, getting dragged into what seems like a strange conspiracy when her boyfriend jumps off a building and accidentally lands on her. On a functional level she is a unreliable lead, shifting from audience viewpoint to an unsettling mystery by the film’s end. On the way she seems to dig further than any other character – there’s a wide ensemble to choose from – into exactly what the Suicide Club is and who is running it. When she is kidnapped by the glam rock criminal Genesis (Rolly) the film takes a shift from the unsettling to the genuinely nasty in a scene involving sexual assault and violent, blood-spattered murder. Moments like this regularly cause a disconnect, making the film feel both shaky and difficult to follow. There is not so much a narrative to the film as the sense of one – one that has been half-edited out or was not even filmed. It transforms Suicide Club into something less enjoyable and more intellectually engaging: there is a desire to see how it ends, but a constant failure to understand the context or the point-to-point story. It is emotionally satisfying, but logically inscrutable.