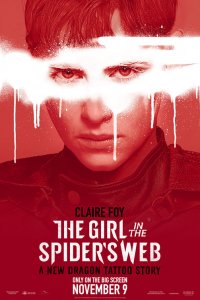 Hacker and vigilante Lizbeth Salander (Claire Foy) is hired by a computer programmer to steal his top-secret application Firefall – a computer program that can hack into any nuclear launch facility and fire its missiles. Soon Salander is on the run as the USA’s NSA, the Swedish secret service, and a mysterious group of mercenaries called “the Spiders” are all hot on her trail.

Audiences enjoy franchises because they provide a sense of reliability and comfort; it doesn’t really matter whether it is a film franchise or a fast food franchise either, so long as it gives the audience exactly what they expect with no unexpected or unwanted surprises. The owners of these franchises love them too, because once they have hit on a winning formula – the perfect burger sauce, or the most effective blend of snarky Robert Downey Jr dialogue and CGI-heavy action sequences – they can sit back and watch the money pour in.

Take 2018, as an example. Of the 10 highest-grossing films of that year, precisely one – Bryan Singer’s Bohemian Rhapsody – was an original work. The rest – Avengers: Infinity War, Black Panther, Jurassic World: Fallen Kingdom, Incredibles 2, Aquaman, Venom, Mission Impossible: Fallout, Deadpool 2, and The Crimes of Grindelwald – were all either sequels or spin-offs of earlier films. Collectively those films grossed something like $11 billion in cinemas alone, so it is no surprise that nothing pleases a Hollywood studio like a reliable franchise blockbuster. We, the viewers, like safe and reassuring entertainment.

The Girl in the Spider’s Web, directed by Fede Álvarez and based on the David Lagercrantz novel, represents an attempt by Columbia Pictures to not only produce a sequel to their 2011 thriller The Girl with the Dragon Tattoo but to re-style and re-format its protagonist Lisbeth Salander for franchise use. Dragon Tattoo was a moderately successful film and to my mind an excellently made one but it was not safe, nor was it reassuring. Instead it presented a brutal and claustrophobic world of nazism, conspiracy, and misogynist violence against women. Spider’s Web tones much of that down. An early scene in which Salander threatens a powerful corporate executive for beating his wifes plays out like a scene from a Batman film. The small-scale conflict of the original is replaced by something out of a James Bond picture, with multiple parties racing to take control of a hacking software that can launch any nuclear weapon in the world.

Salander herself is re-imagined as a superhero-esque vigilante. She is suddenly gifted at hand-to-hand combat, motorcycle stunts, and gunplay. She boasts endurance and resilience far beyond normal people. What previously seemed like edgy goth clothing and make-up now feels like a costume. A complex and bleak character has been transformed into a tidy collection of consumable tics, typed up in a list of dot points like the features of a videogame. The exceptional Rooney Mara is gone, replaced at Fede Álvarez’s behest with Claire Foy. Foy is a great actor, whose work I have admired for some years now, but despite her best efforts she is dreadfully miscast.

The new format re-positions Salander as the protagonist of the film, with former lead character Mikael Blomkvist – played so effectively in Dragon Tattoo by Daniel Craig – now relegated to a supporting role. There is very little for him to do: the story does not require his presence, and new actor Sverrir Gudnason is left pacing around asking questions and looking concerned.

There was a wonderfully ominous tone to The Girl with the Dragon Tattoo, one that Álvarez – despite some decent photography and action sequences – completely fails to recapture. The oppressive tone is replaced with bottom-shelf tuneless noise. The insidious sense of sexualised violence feels both reduced and seedily voyeuristic. In developing the property for a broader audience, the film has essentially removed what made its predecessor so effective. Not every Hollywood production needs to inspire a franchise, and in this case the characters have been broken in the attempt. It seems Salander’s chances for future films have died here, and all that is left is the inevitable attempt at a rebooted streaming series in three-to-five years. Sadly, I cannot see Hollywood ever letting this character go.