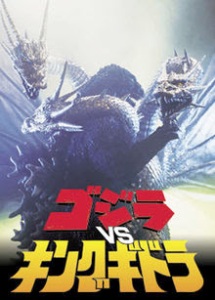 I usually start reviewing a film by providing a short synopsis. There is no short synopsis I can write for Godzilla vs King Ghidorah. It begins with Japan being visited by time travellers from the 23rd century. By the end history has been changed, then changed again, then changed for a third time, and in between several Japanese cities get crushed by Godzilla, the three-headed flying dragon King Ghidorah, and as collateral damage during fights between Godzilla and King Ghidorah.

It’s all a charming nonsense, but then charming nonsense is often the raison d’etre of the Godzilla movies. This was the 18th film in the series, and the third in the Heisei period following 1984’s The Return of Godzilla and 1989’s excellent Godzilla vs Biollante. After Biollante under-performed, the decision was made to abandon new giant monsters (or “kaiju”) in favour of old favourites. As a result King Ghidorah, last seen in 1972’s Godzilla vs Gigan, makes his return. The character was originally an alien, but for this film he is a mutant created by nuclear radiation on three genetically engineered pets from the 23rd century.

It doesn’t make sense, but to be honest very little makes sense in this movie. For one thing it has the laziest understanding of time travel, in which Godzilla can be removed from history yet everybody back in 1991 can still remember who he is. It also features a young Godzilla, back when he was just a Tyrannosaurus-style dinosaur in 1944, defending Japanese soldiers from the American navy. As you do.

There’s an odd nationalist streak running straight through the film actually, not enough to be worrisome or offensive, but strange nonetheless. The villains of the film – time-travelling terrorists who’ve lied about their intentions to the Japanese government – are all played by Americans. They’re uniformly dreadful actors too, but then I suspect the two chief requirements for their casting were (a) being white, and (b) being able to speak Japanese. Robert Scott Field is the least egregious, playing an android named M-11 who is more than a little inspired by Terminator 2‘s T-1000. Did I say more than a little? I meant completely. There’s even a sequence where he drives a truck, which crashes and explodes, and from which he calmly walks away. The only trick they missed was the Brad Fiedel music.

Of course the main reason for watching a Godzilla movie is the giant monster fights, and in that respect the film does not disappoint. It’s always enjoyable watching a pair of rubber-suit monsters trash a miniature replica of a city, and Godzilla vs King Ghidorah is no different.

There is one fascinating subplot through the film, which focuses on a Japanese business tycoon. Back in 1944 he was one of the soldiers saved by Godzilla. Five decades later he encounters Godzilla again, after he refuses to evacuate from his Tokyo skyscraper. The moment when they meet for the second time, staring eye to eye from the tycoon’s office through to the street outside, is actually rather effective.

It’s a shame that Biollante under-performed in Japanese cinemas, because I think we probably lost a bunch of much more interesting films as a result. This film represents Toho Studios in retreat, moving back onto safe, dependable territory to preserve Godzilla’s success. It’s not a bad film, but it’s not particularly good either: just one to sit through amiably while waiting for the monsters to start fighting.

This review was originally published at The Angriest on 2 July 2015. Earlier FictionMachine reviews are available for The Return of Godzilla and Godzilla vs Biollante.