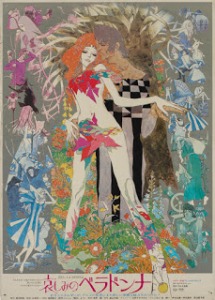 In medieval France, a young couple approach the local lord to request permission to marry. Rather than receive permission, the bride-to-be – Jeanne – is violently raped by members of the court. Abandoning her broken fiancee, Jeanne makes a pact with the devil. Living in the forest, she manifests magical powers and becomes a dangerous threat to the lord’s rule.

Belladonna of Sadness is a 1973 Japanese animated film. In English-speaking countries it has languished in comparative obscurity – I had heard of it but had never seen it – but thanks to an excellent remastered and subtitled blu-ray from Cinelicius Pics it now has the opportunity to be seen by a whole new audience. It is a strikingly original anime, one that will easily divide its audience. It is a challenging, provocative work, told via extremely limited animation. It straddles a deeply uncomfortable line, because while it tells a fiercely feminist story it tells it through a sometimes quite repugnant sexualised male gaze. It is a great movie and an awful one: it challenges the patriarchy while using some of its more sordid cinematic tools. What is a viewer to do?

At the same time several key members of Japan’s animation industry were anxious to push the boundaries of their chosen medium. Anime was enormously popular with children, but directors and animators became keen to produce more provocative and edgy fare. One of those filmmakers was Eiichi Yamamoto, who had collaborated with Osamu Tezuka on Astroboy and Kimba the White Lion. Based within Tezuka’s own company Mushi, Yamamoto successfully secured funding from the distributor Nippon Herald to make three adult-oriented feature-length animes: A Thousand and One Nights, Cleopatra, and Belladonna of Sadness.

Stylistically the film sits in sharp contrast to what one might typically expect anime to look like. This is somewhat remarkable given that Tezuka, who was involved in the production’s early stages, is the origin for much of the general anime ‘look’ since the 1950s. There is a very French look to the film, perhaps befitting its medieval French setting, and while my initial instinct was to credit classic French comics anthology Metal Hurlant for inspiring the design, Belladonna of Sadness predates that magazine by a year. The film largely plays out via beautifully composed but static watercolours. Movement is extremely limited, and oftentimes rather abstract. Occasionally the animation explodes with motion: one stunning sequence sees Jeanne finally give herself up to the devil – both spiritually and sexually – and the film momentarily becomes an anarchic, sexually graphic flurry of colour and movement. I imagine some viewers will find the stop-start nature of the animation frustration, but once the film has played for a few minutes it is not hard to simply ease into the style and go with the flow. Certainly the beautiful artwork makes it easy to watch.

The story that Yamamoto tells is one of female empowerment against a patriarchal society. It uses sexual freedom as a challenge to the feudal overlords, who use sexual assault as a tool of violent oppression. Jeanne’s rebellion fails of course, as these sorts of rebellions often do, and as the assembled masses of villagers watch her be executed their faces transform one by one into Jeanne’s. All woman are Jeanne.

That is well and good, but the commercial reality of Japanese film at the time of Belladonna‘s release means an awful lot of the film showcases Jeanne in various states of nudity. She is sumptuously displayed throughout the story in various states of undress. The film’s semi-abstract sex scenes are a fairly regular occurrence. When the devil appears to Jeanne it is as a shifting, swelling red penis. It gives the film an aggressive male gaze, one that often feels sharply at odds with the feminist nature of the story. That said, Yamamoto regularly uses the abstract animation to great advantage: when Jeanne is raped at the film’s beginning it is depicted not literally but as her naked body tearing in half from the groin. It’s confronting, even upsetting, to watch, but it also robs the scene of any chance of being about sex rather than violence and power.

This is a really original piece of filmmaking. It is a challenging but thought-provoking watch. Despite its Japanese origins, it much more safely recommended to fans of experimental animation in the vein of Rene Laloux than enthusiasts of traditional anime. It needs to be taken as it is for the viewer to fully engage with its merits.

This review was originally published at The Angriest on 7 September 2016.