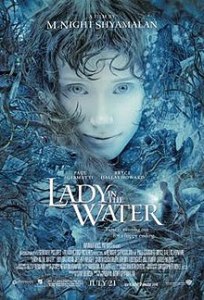 Cleveland Heep (Paul Giamatti) works as the superintendent of a Philadelphia apartment block. One night he discovers a mysterious young woman in the block’s swimming pool. Named Story (Bryce Dallas Howard), she turns out to be a water nymph known as a Narf, come to inspire a writer living in the block who will eventually change the world for the better. Before she can find this writer, however, she comes under attack by the wolf-like Scrunts.

Lady in the Water landed in cinemas in 2006 with a sickening thud, its writer/director M. Night Shyamalan widely lambasted and derided for making what many in Hollywood called the worst film of its year. It was a critical onslaught that felt actively vindictive, as if the entire industry – and audiences along with them – wanted to punish Shyamalan’s earlier commercial success. In 1999 his third film The Sixth Sense had become an international phenomenon, and he had followed it up with three more features for Disney: Unbreakable, Signs and The Village. By the time that latter film had seen release, audiences were noticeably cooling on the director. Box office had started falling, and he was becoming ridiculed for apparent obsessions with surprise ‘twist’ endings and inserting himself into little cameo roles in each of his films.

When it came to make his next film, Lady in the Water, he was so incensed at the lukewarm reaction from Disney executives that he pulled the project and relocated to Warner Bros. It made sense for Warner Bros to green-light anything Shyamalan offered, purely for the chance of one day getting another Sixth Sense out of him. Sadly for them Lady in the Water flopped, losing the studio tens of millions of dollars and becoming one of the most widely mocked releases of its year. That was then, however, and it is always worth revisiting films after the fact (in this case 12 years afterwards) to watch them again without the heat of the cultural noise around them. Sadly in this case the audiences and critics of 2006 were dead on the money: Lady in the Water remains laughably awful cinema.

It is all about the script, which is riddled with ridiculous characters and oddly trite dialogue. Shyamalan constructs a mythology that feels boring and derivative, not to mention packed with unconvincing and silly names for things like Narfs, Scrunts and “the Great Eatlon”. It is the sort of set-up that is reminiscent of a late 1980s Amblin fantasy like Batteries Not Included, yet Shyamalan denies that sort of breezy family entertainment by overloading Lady in the Water with false significant and portent. Doubling down on his script, he then casts himself as a writer fated to change and save the entire world through his fiction, as well as casting Bob Balaban as a bitter and conceited film critic who demonstrates zero understanding of writing before being eaten to death by wolves. I suppose those critics who disliked The Village really got on Shyamalan’s nerves.

To its credit the film boasts a most strong ensemble of actors, led by the always exceptional Paul Giamatti – although Bryce Dallas Howard simply does not convince as the supernatural visitor Story. It also more often than not looks great, thanks to the work of legendary Hong Kong cinematographer Christopher Doyle. James Newton Howard’s score, while overused and overbearing, is beautiful and evocative. The story, the dialogue, and the insufferable egomania in which the film is liberally soaked? Not so much. There is a reason Lady in the Water almost destroyed Shyamalan’s career. He has demonstrated himself to be a phenomenal writer and director through The Sixth Sense and Unbreakable. Lady in the Water is just a terrible film, pure and simple.