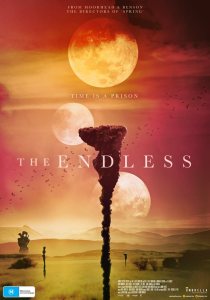 Brothers Justin (Justin Benson) and Aaron (Aaron Moorhead) once escaped from what Justin described as a ‘UFO death cult’. Several years later they are barely making a living as cleaners in the city when they receive an old videotape in the mail. On the tape they find a message from the cult, farewelling them before the cult’s ‘ascension’. Unable to resist the urge to return and see his friends one final time, Aaron convinces Justin to return to the cult’s compound one last time.

The Endless is an excellent film, but it sure is difficult to categorise. The easiest genre to file it under world be horror, but in all honesty it is not really a horror film. It is not particularly frightening. Instead it is unsettling; it generates tremendous unease. It is obvious from the opening scenes that Justin and Aaron will not find anything good when they return to the forest compound named Arcadia, but precisely what nightmarish situation they encounter is initially far from clear. That growing sense of the unknown is what makes the film work so well.

When they return to the cult, they are met with just the right blend of open arms and uncomfortably creepiness. There’s the weird karaoke session, and the suspiciously home-brewed beer, the ‘red flower’ drugs. Key among these early warning signs is an odd metaphorical game based around pulling a rope attached to some unseen high platform – or something else. Like all weird cults, of course, the residents of Arcadia keep insisting they are not a cult at all. Their ingratiating behaviours suggest otherwise.

Benson and Moorhead not only co-direct the film, they also play its leads. They are both pretty good, playing their respective roles in a fairly direct and naturalistic manner. That understated performance style certainly does not get employed across the board. A few of the later supporting characters feel quite exaggerated – but by the point they appear the film has already turned more than a few narrative bends, making them suit the heightened and near-hysterical vibe rather well. Fans of Benson and Moorhead’s earlier film Resolution are in for an unexpected surprise. The beauty of that film’s intrusion on this is that if you’ve never seen the earlier work, you likely won’t even notice it was referenced.

The directors have an exceptional eye for imagery. They are working with a low budget, but have a knack for still generating just the right camera angle or perfect piece of computer-generated trickery to pull the audience off-kilter. The strangeness of these images grows as the film progresses, slowly easing into something genuinely otherworldly and paranoid.

To their credit they actually pull their story towards a relatively satisfying conclusion. Too many how budget movies in this style work to a crescendo and simply stop, with all plot threads flailing into the closing credits. For some it might feel that not enough is answered by the conclusion. Personally I think the film answers the only questions that actually mattered. These kinds of creepy, near-Lovecraftian independent thrillers are arriving with increasing frequency over the last few years. The Endless is absolutely one of the very best.

For Australian readers, The Endless is playing at Carlton’s Cinema Nova from next Thursday 22 March for a limited season. If you live in Melbourne, you should absolutely check it out.