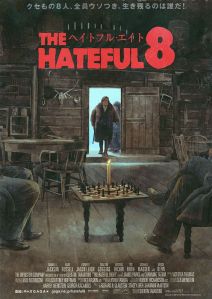 In post-Civil War Wyoming, bounty hunter John “The Hangman” Ruth (Kurt Russell) rides a coach towards the town of Red Rock, where he intends to deposit his prisoner Daisy Domergue (Jennifer Jason Leigh) with the local sheriff in return for a handsome bounty. On the road he picks up both another bounty hunter (Samuel L. Jackson) and a Southern white supremacist (Walton Goggins) who claims to be Red Rock’s new sheriff. When a blizzard traps them in an isolated haberdashery, they find themselves trapped with a group of four mysterious strangers – at least one of whom may be collaborating with Domergue to set her free.

Quentin Tarantino has spent almost his entire directorial career as a keenly divisive filmmaker. For many, appreciation for his films seem to run through three stages: an initial thrill at his pop culture sensibilities and snappy dialogue, a subsequent dislike that his films seem cobbled together from images and ideas by earlier filmmakers of the 1960s and 1970s, and finally a satisfaction that his textual poaching is actually the point of his work. He is arguably America’s definitive post-modern filmmaker, taking pre-existing elements and remixing them into new forms. The Hateful Eight is his eighth and most recent feature, and much like his seventh Django Unchained, seeks to rework the western genre into an actively violent, gory and self-aware form. The result is almost one of Tarantino’s very best films, save for one crippling and unpleasant flaw. We will get to that flaw in a moment, and putting it aside leaves an exceptional and inventive work of cinema.

It is a long film, but also a patient one. It uses long scenes of dialogue and non-linear storytelling to expand upon and reveal an ensemble cast of variously disreputable characters. No one is particularly likeable, and if they were real people you would be hard-pressed to want to be in the same room as any of them, but sharp comedic dialogue and uniformly sterling performances make them a sensationally entertaining group to observe. Much of the cast are rock-solid dependable actors such as Kurt Russell, Tim Roth and Jennifer Jason Leigh. The real stand-out is former star of The Shield Walton Goggins as the racist, comically stupid sheriff Chris Mannix. Goggins has always been a strong actor, and in The Shield he made his character fascinating to watch while still being utterly repellent. He is much, much funnier here, but he still achieves the same effect: Mannix is a thoroughly ugly white supremacist, yet Goggins makes him so interesting. He also has easily the broadest character arc of the entire cast, and does not waste one second of that opportunity.

Tarantino’s playful, knowing screenplay is beautifully paced and structured, and showcases his particular gift for slipping from comedy to drama to blunt, horrifying violence with ease. It all looks tremendous thanks to cinematographer Robert Richardson, whose long collaborations with Tarantino, Scorsese and Stone have made him easily one of the best photographers in the business. It even sounds brilliant as well, with Tarantino employing legendary composer Ennio Morricone to provide an original orchestral score. This is a first for Tarantino: his other films have predominantly sourced pre-existing music.

So what is the flaw? Put simply, and acknowledging this will spoil the film’s finale for any reader that has not seen it, The Hateful Eight has a genuinely ugly attitude to women. In terms of race it is remarkably on the money, confronting the events of the Civil War and using Samuel L. Jackson’s Major Marquis Warren to provide a strong commentary on post-war race that resonates today. In terms of gender, it’s this simple: there is one key female character – Daisy Domergue – and she is imprisoned, beaten, traumatised, and murdered. The film’s final scene involves two mortally wounded men – one a black Civil War hero, the other an avowed Southern racist – bonding together and laughing as they lynch a blood-soaked, badly injured woman from the rafters. There are excuses one can throw at the problem, sure: 19th century America was probably pretty sexist, and Tarantino is deliberately echoing old westerns that were also generally pretty sexist. That is the problem, however: they really are excuses. At first it seems a genuine shame that an otherwise masterful film heads down such an actively unpleasant route.

Jennifer Jason Leigh is great in her role. In that regard she follows a range of exceptional female characters in earlier Tarantino films; the Bride in Kill Bill, Jackie in Jackie Brown, and so on. At the moment when it really matters, Tarantino appears to let her down. The Hateful Eight is mostly great, but for many that one flaw is one hell of a dealbreaker. Unless, of course, there is a deeper political motive here: an argument that sexism and misogyny is so toxic in America and so inescapable that even black militants and white supremacists will bond over the abuse of women. It is a pretty break point to argue; in the end it is up to the viewer how they want to interpret what goes on.