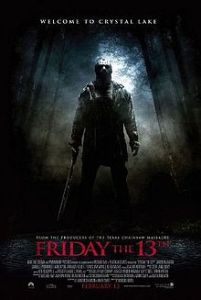 A group of college students visiting a house near Crystal Lake run afoul of Jason Voorhees (Derek Mears), a masked serial killer who roams the area.

Everything old in Hollywood is, inevitably, new again. After finding commercial success remaking The Texas Chainsaw Massacre with the production company Platinum Dunes, New Line Cinema contracted the producers – including director Michael Bay – to develop a remake of Friday the 13th. New Line ultimately co-produced the film with Paramount Pictures, which provided it with access to story elements from the original 1980s Friday films. Both the Chainsaw Massacre and Friday remakes shared a director in the German-born commercial filmmaker Marcus Nispel.

There is an immediate challenge facing the Friday the 13th remake. Audiences understandably expected a hockey mask-wearing, machete-wielding Jason – except the character only gained those items in the third of the original films. Of course Jason was not in the original Friday the 13th at all. How does the new film overcome this? By effectively remaking three films in a row, truncated down to 97 minutes for all three. There is a very short, blunt prologue featuring Star Trek: Deep Space Nine‘s Nana Visitor as Jason’s mother Pamela, then an extended 20 minute sequence in which an adult Jason kills a group of stoners, and then just over an hour of the main film. It is a weird structure that works a little better in retrospect than it does in the moment.

The most immediately obvious changes in the new film stem from the time in which it was made. There are 29 years between the original Friday and its remake, and the ground of the horror genre shifted considerably over that time. More attention is paid to giving the characters some depth and development. Rather than simply whittle down a group of unremarkable college students until one remains, the film actually gives them independent motivations and personalities. There is Jenna (Danielle Panabaker), dissatisfied with her boorish boyfriend Trent (Travis Van Winkle) and more interested in helping Clay (Supernatural‘s Jared Padalecki), who has come to town searching for his missing sister. Together they make pretty much the most likeable and watchable pair of protagonists out of the whole franchise.

Jason himself gets an overhaul as well, transformed from an admittedly entertaining one-note homicidal maniac into a sort of creepy survivalist. He has built himself an extensive underground compound beneath the Crystal Lake campsite, rigged with tripwires and hand-crafted alarms, and furthermore he has actually kidnapped and imprisoned Clay’s sister Whitney (Amanda Righetti). It is this development that actually justifies the weird 20-minute massacre in the film’s first act. Jason is quite a bit thinner and more athletic in this iteration as well; he comes across much more human than super-human, pretty much for the first time.

The final major shift is in the tone and level of the horror. Following the shock of 9/11 American pop culture became remarkably cynical and dark, in much the same fashion as Japanese culture did following the Tokyo subway bombing and Kobe earthquake of 1995. For horror cinema that meant the rise of survival horror, often mis-labelled as ‘torture porn’, in which protagonists’ goals shifted from defeating a monster to simply surviving the unbearable. Jason’s murders here are particularly unpleasant; not simply hacking his victims to death but torturing them beforehand. It shifts the tone of the film a considerable difference. It was easy to laugh along with the camp earlier instalments. That is a much harder task here, and makes for a comparatively humourless movie. It is still broadly effective, but seems unlikely to appeal to all Friday fans.

While generally enjoyable as a post-9/11 survival horror, Friday the 13th did not quite capture the audience New Line and Paramount were seeking. This revival of the franchise ended with a single film. While efforts are underway to relaunch it a second time, legal dramas look set to delay it for another few years. For the time being Jason Voorhees’ murders end here, not on a particular high but certainly not on a low either. Friday the 13th is a solid and broadly effective, but somewhat generic, thriller.