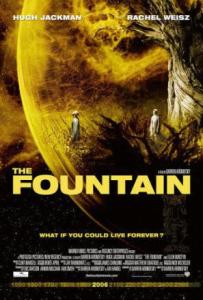 A medical researcher races to find a cure for cancer before his wife dies from a brain tumour. In the 1500s, a Spanish conquistador embarks on a perilous journey to find the Biblical tree of life, to please his queen. In the far future a man travels halfway across the galaxy in a glass sphere, haunted by the image of a woman.

All three played by Hugh Jackman and Rachel Weisz, and all interrelated in Darren Aronofsky’s inventive, lyrical and enormously frustrating film The Fountain. Coming off the back of his first two hugely acclaimed films Pi and Requiem for a Dream, The Fountain ran straight into a wall of commercial disinterest and critical disdain. While Aronofsky’s career easily recovered with the likes of Black Swan and The Wrestler, it does feel to an extent that The Fountain got left behind and forgotten. That strikes me as a deep shame; it is a difficult film, but also an enormously rewarding one.

The film’s primary storyline focuses on Tom Creo (Jackman), who is experimenting with various plant-based compounds to find a cure for cancer. His wife Izzi is dying, and instead of spending her remaining time by her side he obsesses over his work. It is a bleak, miserable set-up that resonates on a deep emotional level. Izzi is hand-writing a novel into a journal, titled “The Fountain”, and it details a conquistator sent to South America by the queen to find a source of immortal life.

The film cuts to the content of Izzi’s novel, with Jackman as Tomas the conquistator and Weisz as Isabella the queen. They clearly reflect Tom and Izzi. As the film progresses however, it becomes less clear if this is simply a reflection of Izzi’s story or if it actually happening 500 years into the past. When the 21st century Tom fails to find a cancer cure, but may have stumbled upon an anti-ageing treatment, the plot of the present-day arc begins to reflect the plot of the historical one.

If that was not enough there is also the matter of Tommy, a monk-like bald ascetic who is travelling into a nebula inside an enormous glass sphere. He shares the sphere with an enormous old tree, which he cares for and feeds from. Tommy is haunted by images of Izzi, leading to the strong implication that Tommy and Tom are the same person.

These three parallel stories begin to resemble one another in terms of tone, story and particularly visual imagery. As the film approaches its bravura climax, they appear to begin crossing over. Exactly how they do, and which ones are real and which are inside Izzi or Tom’s heads, Aronofsky leaves up to the viewer. There are multiple readings of the film out there. Some people will find it frustrating that Aronofsky never makes his own intent clear. Others will likely argue that is part of the core appeal of the film.

Both Jackman and Weisz give excellent performances. Weisz is striking and serene as Izzi, having already accepted her impending death and who simply wants to be happy until the end. Jackman presents a powerful portrait of grief and rage, so tightly bottled up that it keeps spilling over the edges.

Technically the film is both inventive and impressive. An initial attempt to make the film with a $70 million budget collapsed, and Aronofsky ultimately made The Fountain for about $35 million. Despite these limitations he still manages to tell a story in past, present and distant future, and tell it in a visually distinctive and memorable fashion. Some of the imagery on display is simply breathtaking. Also impressive is Clint Mansell’s musical score, which is partially performed by the brilliantly talented Kronos Quartet.

The Fountain is, at its heart, an arthouse film. It favours images and emotional tones over an easily appreciated narrative. It essentially demands that its audience work a little and meet it halfway. There are many ways to put the story together in one’s head; I have my own opinion, but I think it is important that each viewer be free to assemble theirs. It is a challenging film, but to my mind an underrated and rather rewarding one as well. The critics of 2006, for the most part, got this one wrong.