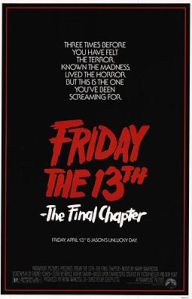 Incorrectly believed dead, Jason Voorhees (Ted White) escapes from the hospital morgue and journeys back to his home at Crystal Lake. Nearby he finds a house rented by college students for the weekend, a family of three, and a hitchhiker (Erich E. Anderson) who has arrived to track down and murder Jason in revenge for the death of his sister.

After the fairly poor Part 3 – intended to be the final Friday the 13th feature – Jason Voorhees returned for what was planned to be a definitive ending; so much so that this fourth film in the franchise eschewed a part number in favour of the title The Final Chapter.

New director Joseph Zito and screenwriter Barney Cohen construct a much stronger sequel here than Part 3. It repeats the well-tested formula of the earlier films but adds several new wrinkles to keep things fresh and interesting. The main one is the triple set of victims for Jason to hunt down: not just the standard group of over-sexed teenagers but a mother and two children, and a vengeful hitchhiker who has arrived with the direct purpose of hunting Jason down and killing him himself. Both are strong, emotive additions, and give the film a lot more to do before it hits the climax.

The teenagers this time around are not altogether much nicer than those in Part 3 but they seem a lot more interesting. Crispin Glover manages to make the underconfident Jimmy a quite sympathetic character, despite his entire dilemma being whether or not he is able to sleep with one of the girls in the house. His best friend, the over-confident and cocky Ted (Lawrence Monoson) should be actively irritating, but winds up generating a fair amount of appeal as well. Samantha (Judie Aronson), Sarah (Barbard Howard) and the twins Tina and Terri (Camilla and Carey Moore respectively) all manage to sell their characters in relatively strong ways. Ultimately they are all just horny teenagers, but they feel a little more believable than those in previous Friday films.

The addition of a family next door gives the film an extra dimension. It is easy to dismiss the victims in the average Friday the 13th film: they’re mostly foolish, simplistically written and performed, and ultimately cyphers to allow Jason to commit murder. Suddenly having a loving mother, a non-sex obsessed teenage daughter and a 12 year-old son named Tommy (Corey Feldman in his first major role) gives a much stronger sense of peril than has existed before. The film does not shy away from putting them in jeopardy either. The mother (Joan Freeman) is killed, and Trish (Kimberly Beck) and Tommy only survives following some extremely traumatic actions. Rob, the vengeful hitchhiker, gives the film a sense of being part of a larger whole. The film actively reaches back to Part II and acknowledges for the first time that the world of Friday the 13th has consequence.

As the characters begin to get hunted down one by one, Zito keeps Jason largely out of sight – making him a somewhat more menacing and suspenseful figure. When he does finally reveal himself during the film’s climax – still boasting the cracked and bloodstained hockey mask from Part III – it is all the more satisfying as a result.

Ultimately The Final Chapter is a slasher movie, and brings with it all of the expection conventions and stock narratives that make those films what they are. There is nothing here that is going to surprise, or lift the film above its genre to become a significant part of the cinema landscape. Within its genre confines, however, it is absolutely one of the best films of its type – and easily the best of the four Friday the 13th films reviewed thus far.