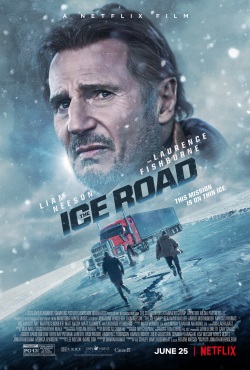 All hail the “dad movie”, providence for the white middle-aged man. Perennially dispatched from play-it-safe filmmakers and studios alike, the dad movie offers masculine, muscular entertainment to which beers may be drunk and during which afternoon naps may be taken on the couch without fear of missing significant plot points. ‘That was the best movie I’ve ever slept through,’ my father-in-law will often remark, and I think he probably has a solid winner with Jonathan Hensleigh’s new action film The Ice Road.

Liam Neeson plays Mike McCann, a professional trucker supporting his Iraq veteran brother Gurty – whose trauma has caused significant aphasia. When a diamond mine in northern Canada partially collapses, trapping injured miners inside, Mike and a team of drivers must embark on a desperate mission to deliver a new wellhead to set them free. This involves driving heavy vehicles over frozen rivers that could catastrophically collapse at any time.

This is not the first time viewers have seen down-on-their-luck truck drivers take desperately needed supplies through severe, life-threatining conditions. Cineastes and filmgoers of a certain age will recall Henri-Georges Clouzot’s masterful thriller The Wages of Fear (1953). That film followed a group of drivers in South America, each desperate for money, taking on the task of driving nitroglycerin through the jungle to stop an oil well fire. In 1977 American filmmaker William Friedkin directed a superb remake titled Sorcerer starring Roy Scheider that, while failing at the time – everybody was watching Star Wars, has since become regarded as Friedkin’s third great masterpiece after The French Connection (1971) and The Exorcist (1973). It is not difficult to see that Hensleigh’s screenplay has cribbed heavily from pre-existing work. There is no on-screen credit – either for Clouzot’s film or Georges Arnaud’s original 1950 novel – so one can only assume that Hensleigh’s adaptation is unofficial. Pastiche is generally a fine Hollywood tradition, but in this case The Ice Road slides suspiciously close to plagiarism.

Of course The Ice Road is as uncomplicated a film as it can manage, and so the depth of character and frightening intensity of those earlier movies have not been duplicated. This is lowest-common-denominator stuff: Liam Neeson grunts and grumbles his way through as he has numerous films over the past 20 years, and no stereotype is left unturned. Back in the 1990s The Ice Road would skip cinemas entirely and open on home video rental. In 2021 its release varies from market to market: Americans are getting it on Netflix, and Australians are seeing it on the big screen.

Here is the thing though: in the 1990s I was a buyer for a suburban video library, and had The Ice Road been released direct-to-video it would have been a sizeable hit. There is absolutely a market and a place for this sort of simple, populist action, and The Ice Road does an efficient job of hitting that sweet spot. It is stylishly shot by Tom Stern, and boasts a solid Zimmer-esque musical score by Max Aruj. The dialogue is not bad, but rather functional. Characterisation is minimal and generic, because the film is tightly focused on plot. I think it is critical to judge a movie not simply on what it is, but what it is attempting to be. In this case, The Ice Road is a solid, no-nonsense action thriller. There is audience for that – there has always been an audience for that – and while it seems unlikely that anyone would need or want to watch it twice, it still does its job the one time it matters.

There are some other notes to be made, both positive and negative. It must be said that, at 69, Neeson is definitely getting too old for this sort of thing, but is clearly happy to ride that gravy train until Hollywood works that out – I am very supportive of him in this. There is some nice indigenous representation in the film, with Native American actor Amber Midthunder playing the female lead. As for Marcus Thomas – an able-bodied actor playing a character with a disability – the issue is not so much about casting as it is accurate representation. Gurty’s aphasia feels an odd and tokenistic choice, and Thomas’ performance doesn’t quite convince. It is nice to see Laurence Fishburne make an appearance in the film, but his role is sadly rather brief.

To boil it all down: you already know if The Ice Road is a movie for you. It does what it does, and you should be able to recognise if you are its target market. I am guessing you are also probably someone’s Dad.