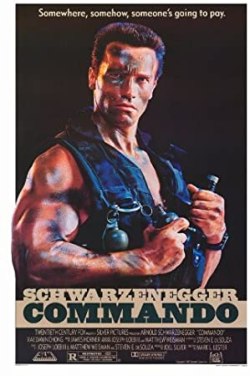 The 1980s was a decade dominated by popular high concept action films, heavy on muscular stars who were short on refined talent but huge on screen presence. More than anything it was the decade of Sylvester Stallone versus Arnold Schwarzenegger, and if there is one Schwarzenegger film more symbolic of the 1980s than any other it is Mark L. Lester’s 1985 hit Commando. There were certainly better films to feature Schwarzenegger – and absolutely more iconic ones – but Commando came stripped of science fiction and fantasy elements, and simply showcased the actor engaged in constant, murderous action. There is nothing to the film beyond physical combat and gun violence, and Arnold Schwarzenegger.

It is also, weirdly enough, the one famous American action flick from the decade that I had never seen. There was no specific reason to avoiding it for so long; a simple combination of disinterest and lack of immediate opportunity was enough. Eventually, however, the small hole in my pop culture unawareness started to niggle, and Disney+ made this 20th Century Fox movie available to stream online. I have now, finally, watched Commando. You lucky people.

Grow up with Commando and it will be gifted with a certain nostalgic glow, enabling the viewer to coast over its weaker elements and simply enjoy the stuff they enjoyed when they were young. Come to Commando more than 35 years later and it’s evidently all weaker elements. The plot is a nonsense, the dialogue atrocious, and the ham-fisted attempts at one-liners inspire eye rolls ahead of laughs. I am not a great believer in ‘so-bad-it’s-good’ – in most cases such films simply have enjoyable elements in otherwise unenjoyable productions – and in all honesty Commando is a solid piece of proof for that position. This is simply a poorly made movie for the fashion of a time where quality writing was not a major consideration.

What is particularly interesting in how badly Commando is written is that the film is a shameless power fantasy. Schwarzenegger’s John Matrix simply never encounters a challenge he cannot easily overcome. An endless cavalcade of mercenaries and henchmen fall to his infallible accuracy, and he breezes from one pitched gunfight to another with barely more than superficial cuts and scratches.  Schwarzenegger’s physicality matches such a character well, but almost the entire supporting cast around him seem charmless. The effect for a 21st century observer is almost Brechtian; divorced from any illusion of dramatic struggle, one can sit back and study this powerful display of male American Cold War machismo for what it is. So many enemy soldiers and criminals fall anonymously in a shower of bullets and explosions that each begs for their own Austin Powers-style eulogy. I imagine this is precisely how future generations will find the Fast & Furious movies: take these violent symphonies out of their context and they’re just hollow machines. You cannot realistically condemn the screen violence because none of it ever feels real. Commando is full of action but is conflict-free.

One absolute highlight is Mad Max 2 alumnus Vernon Wells, who plays the villain’s right-hand with a combination of chain mail, heavy metal bravado, and the most Australian of handlebar bush moustaches. Boosted with a surfeit of nervous energy and an on-the-nose delivery, he marks the sole performer with whom one can genuinely laugh. Everybody else invites being laughed at instead, including Schwarzenegger himself. Commando may have been a perennial hit on home video for a decade or so, but it lags way behind genuinely strong Schwarzenegger vehicles like Conan the Barbarian and The Terminator.

You cannot come in late for any decade’s trash cinema. Either you watched it at the time, and fondly remember the time when you first saw it, or you do not need to catch up on it all. To watch Commando now for the first time is to examine a museum exhibit: fascinating for sure, occasionally even enjoyable in its own way, but nonetheless static and inert. I feel wiser for having finally see it – but perhaps just a little less happy at the same time.