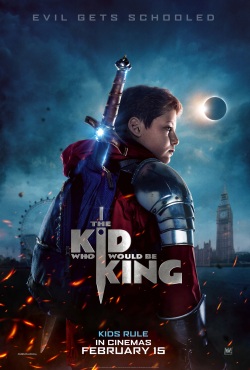 Properly-made family entertainment is just about the hardest thing to get right in filmmaking, and yet for all of the effort placed into the best examples it is exceedingly rare for such a film to be a hit. Children are aspirational viewers, after all, and do not necessarily want to watch something aimed directly at them. Instead they would rather watch more violent material made for adults. At the same time not enough adult moviegoers have a sufficient sense of whimsy to watch something clearly in part suitable for children. Both sides need to open up to the possibilities of the genre: films suitable for young minds but which are staged with just as much inspiration, talent, and effort as their mature equivalents.

Joe Cornish’s The Kid Who Would Be King (2019) should have been a commercial hit, but instead made barely half of its production budget in theatres. It is at least as good as popular fantasy films of recent years, including all eight of the Harry Potter movies, and it is honest-to-goodness actively better than most of them. It is charming, inventive, smartly written, and delightfully performed by a talented juvenile cast. It admittedly lacks in star power – Patrick Stewart and Rebecca Ferguson are the best you’ll get – and is not based on a popular children’s novel. All the same it deserved much better than it got. All that is left now is to catch it on Disney+ and regret missing it two years ago when it was briefly in cinemas.

Alex (Louis Ashbourne Serkis) is a 12-year-old boy living in London. After finding an abandoned sword on a building site, he is followed by a new classmate claiming to be Merlin (Angus Imrie) and hunted down by burning undead warriors from beneath the ground. With best friend Bedders (Dean Chaumoo) and two school bullies added for muscle, Alex must go on crusade from London to Cornwall to defeat the immortal witch Morgana (Rebecca Ferguson).

Comic turned filmmaker Joe Cornish gained an awful lot of praise for his 2011 alien invasion film Attack the Block. The Kid Who Would Be King marks an unexpected swerve in tone, abandoning the earlier work’s comic violence and rough social commentary and adopting something more akin to a BBC children’s serial. It runs on a charming, goodhearted mindset. Despite some pretty dark, horror-inflected fantasy elements, its warm sensibilities ensure it is an all-ages production. The action is strong and the characters likeable.

It features something of a second-generation talent in its lead cast, with Alex played by Louis Ashbourne-Serkis (son of The Lord of the Rings actor Andy Serkis) and young Merlin by Angus Imrie (son of Harry Potter actor Celia Imrie). The standout among the younger performers is Dean Chaumoo as the gloriously optimistic geek Bedders; he has a genuine comic talent, and I hope to see his career go from strength to strength. Patrick Stewart and Rebecca Ferguson both feel under-utilised, although Denise Gough is wonderful as Alex’s over-worked single mother.

The film’s design work is visually impressive, with a heavy Frank Frazetta influence giving the undead hordes a very Conan the Barbarian-like feel. This is a film that definitely seems to be punching above its weight.

The Kid Who Would Be King is masterful family entertainment. It is not just a children’s film with a jokes inserted to satisfy the grown-ups – it is a broad entertainment for all ages at once. The beauty of cinema is that, success or failure, films – once made – tend to stick around for years to come. We all have plenty of time to find and appreciate this wonderful work.