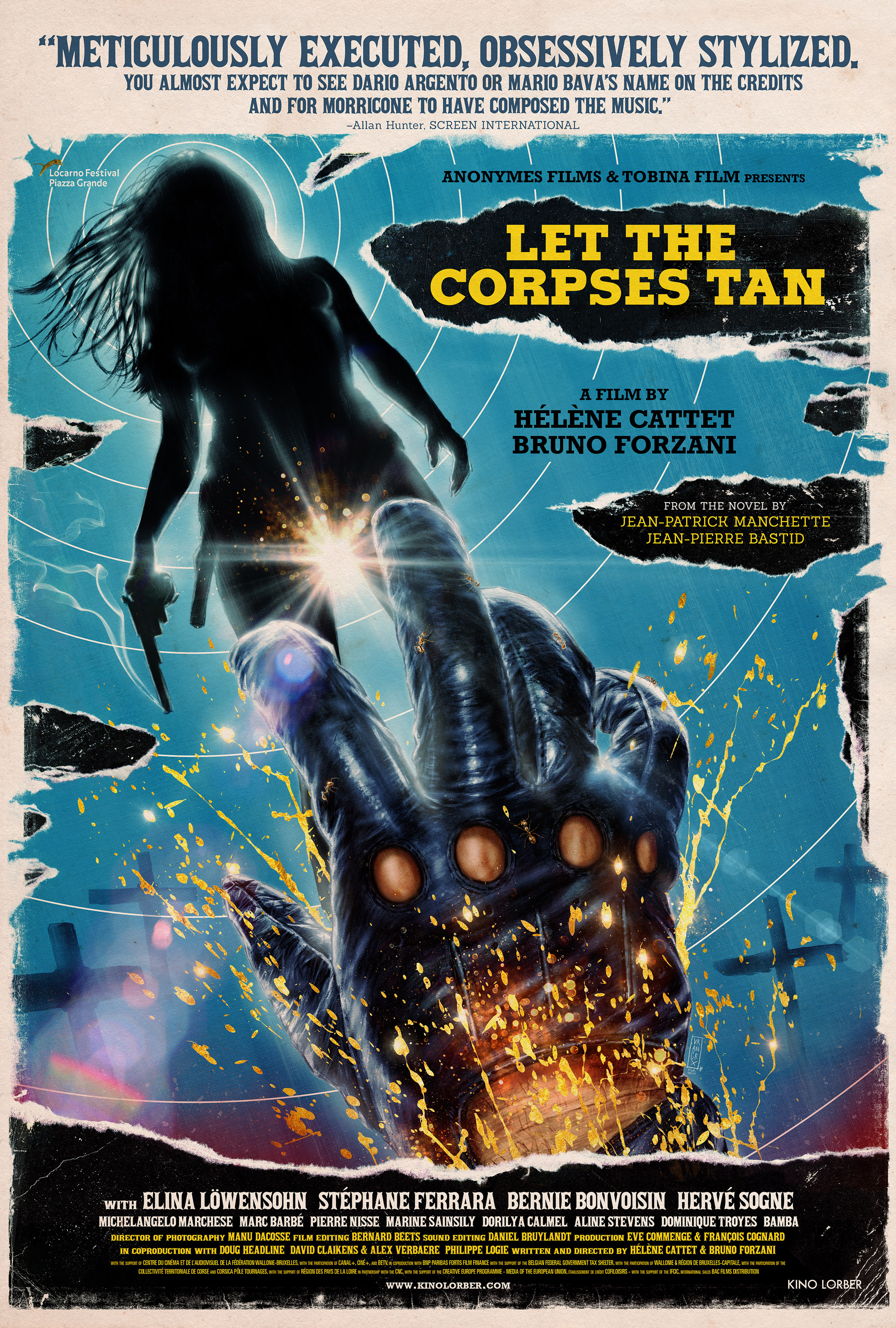 A hot Mediterranean sun blazes down on a violent gang of thieves in hiding in Hélène Cattet and Bruno Forzani’s self-consciously stylish crime thriller Let the Corpses Tan. Based on a pulp novel and primarily shot on location in Corsica, it is a bloody and violent thriller with a closer focus on what it looks like rather than how its story plays out.

The thieves, led by the steely-eyed Rhino (Stéphane Ferrara), steal 250 kilograms of gold. On the run and seeking a temporary refuge, they arrive at a deserted and largely ruined village. Its only resident: a bohemian artist named Luce (Elina Löwensohn). Unexpected visitors, followed quickly by a pair of motorcycle cops, disrupt Rhino’s plans – leading to the mother of all shoot-outs and a rapidly rising body count.

There really is not a lot to Let the Corpses Tan‘s story. The bulk of its running time is dominated by an overtly extended shoot-out between rival parties. Most of the narrative is devoted to a long series of double-crosses, unexpected alliances, and mistaken allegiances. It is easy to get muddled by the seemingly endless strings of betrayal, or to keep straight in one’s head which character is allied to which. Thankfully the film is so doggedly invested in its action and its aesthetics that it often easy to sit back and enjoy the ride.

And what an outstandingly composed ride it is. The photography and editing is all iconic frames and rapid cuts; each shot purposefully composed, each sudden edit a whip crack to the eyes. It is a Belgian film, but owes a huge debt to Italian cinema. Most moments seem sprung from spaghetti westerns or giallo pictures. When the film digs deep into its core shoot-out, Cattet and Forzani begin splitting each character thread into its own discrete moment. On-screen captions repeatedly report the time. A character is shot at 10.20pm, for example, and the film will jump back to 10.18pm to reveal the identity of the shooter and the circumstances that led to them firing. This non-linear technique is pushed to its logical extreme. Pretty much everything is here. It is all extremes, with no thoughtfulness or nuance. In its replication of crude pulp action, it seems relatively unparalleled. It is up to the viewer whether or not it is also enjoyable – the film does not seem to care either way.

Performances are solid but characters are thinly drawn. Among the lead cast Elina Löwensohn is a stand-out, boasting a languid sexuality and a layered sense of mystery that fills in the gaps where the screenplay has left the character wide open.

A series of dreamlike sequences of an anonymous woman being restrained and attacked by a group of men pushes the film firmly into art-house territory. It is by no means challenging in the manner of the much-debated New French Extremity (Irreversible, High Tension, Inside, et al) but it does seem to join a growing wave of more feminist violent works among Francophone cinema – a wave that includes the likes of Raw, Revenge, and Knife+Heart. This is a provocative and exciting work, but I suspect each viewer will love it or hate it. The film really has not left any room in-between.