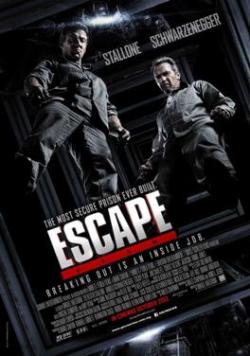 Ray Breslin (Sylvester Stallone) breaks out of prisons for a living, using his unique skills set to find the weaknesses in America’s maximum security facilities. When he is hired by the CIA to undertake the same task on an international black-book prison, he suddenly finds himself trapped there without a means of escape and no contact with the outside world. With fellow inmate Emil Rottmeyer (Arnold Schwarzenegger) he fights to escape the unescapable, and bring down the prison governor (Jim Cavaziel) who refuses to let him leave.

Back in the 1980s the two biggest names in cinema were Sylvester Stallone and Arnold Schwarzenegger. Stallone was the star of the popular Rocky and Rambo franchises, while Schwarzenegger featured in a string of smash hits including The Terminator, Commando, and Predator. For the average viewer that decade, the coolest thing imaginable would be for Stallone and Schwarzenegger to appear in a movie together. Now they have, and how you respond to Escape Plan likely depends on how much you like those action movies from the 1980s.

Sure, both actors have since shared the screen in The Expendables, but they were very much Stallone’s films. Schwarzenegger worked for four hours on the first and four days on the second. This is for all intents and purposes their first proper team-up.

It’s a lot of fun. This isn’t a great movie. It’s arguable that it isn’t even a good movie. It is, however, a fun movie. There’s a lot of action. There’s humour. There are fistfights and gunfights. There are about a hundred cliches. It is, in short, a movie that does exactly what it says on the tin. Expect what you get, and you’ll get what you expect. In many respects this is a loose remake of Lock Up, Stallone’s previous ‘man breaks out of prison while the warden tries to break him’ movie.

Stallone plays exactly the sort of character he played through the 1990s in films like Daylight, The Specialist, and Demolition Man; he plays it light, and his character’s a smart, resourceful sort of guy. I’ve always liked Stallone: he’s a smart actor and, one or two ill-judged comedies aside, he knows his limitations. Schwarzenegger feels like more of a surprise: he comes across as a lot more relaxed and self-assured as Rottmeyer than he does in earlier roles. I got the same vibe from him in The Last Stand. He comes across as an actor without anything to prove, so now he’s simply taking roles that sound like fun and simply enjoying himself. Crucially, both actors play their roles at an appropriate age. There’s nothing more embarrassing than watching an actor of pensionable age pretend he’s an early middle-aged man.

I swear Jim Cavaziel performs the role of Warden Hobbes as if he’s Christopher Walken. It’s a slightly artificial effort. Vinnie Jones plays Vinnie Jones, while Sam Neill is on hand to sigh wearily and take a pay cheque.

This is pulp, disposable cinema, but that’s not a bad thing. Sometimes we need to watch something that’s fun, lightweight and relatively forgettable. It’s a palette cleanser of a film: watch it, laugh with it or at it, and go about your day. There’s no shame in being a B-movie, and I sense no shame whatsoever in Escape Plan.

This review was originally published at The Angriest.